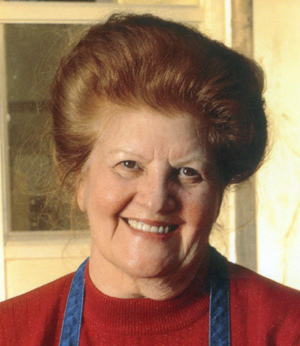 Rare is the cook who turns out feather light biscuits. Transforming flour, fat and buttermilk into an airy breakfast treat takes what the old folks dubbed “biscuit hands.” Eula Mae Doré had them. The famed cook, who lived most of her life on Avery Island, running the commissary store and cooking fabled dinners for the McIlhenny family died on Saturday at her home on the island.

Doré grew up in Coteau, a country girl, with the raw ingredients of Cajun cooking surrounding her on her family’s farm. Her mother died when she was 10, leaving her to tend to her siblings. That’s when she began cooking, using everything at hand from the fresh pork from the annual boucherie to picking blackberries and pecans for her pies. When she was 20, she married Walter  Doré and moved to Avery Island. She began her life on the island in the Tabasco bottling plant, but within a few years, she and her husband, whom she called MoNeg, were running the small commissary on the island, making famed poboys at lunchtime, and turning out the deeply flavorful bisques and gumbos served on the McIlhenny tables at night.

When Doré was 71, Paul McIlhenny persuaded her to collaborate on a cookbook with St. Martinville author and chef Marcelle Bienvenu. It was an adventure, Bienvenu says in her introduction to Eula Mae’s Cajun Kitchen. Bienvenu arrived on the first day, equipped with measuring spoons and cups, a small kitchen scale and a tape measure. Doré told her she used an old jar or the palm of her hand to measure. They had to work that one out. “By the end of the day, I realized what a special lady and cook she was,” Bienvenu wrote. “I noted that she never wastes anything. The seeds of bell peppers were put in a small container to take home and plant in her garden. The skins from the yellow onions were stowed in a bag. “Darling, keep the skins and put them in the freezer. Put them in the pot when you’re making shrimp stock to make it golden colored,” Doré told Bienvenu.

Thrifty country wisdom and intuitive cooking tips permeate the book as well as spicing the relationship between the two women. While working on the book, which took three years, Bienveun says food writers and television crews frequently came to the island to interview and film Doré cooking one of her specialities. She has cooked alongside renowned chefs Pierre Franey, Jacques Pepin, Marion Cunningham and Sheila Lukins, as well as appearing in PBS specials and on the Food Network.

Throughout her long career, Doré remained a loving and generous nurturer, feeding her friends and family with the best the earth and waters had to offer. She was 78 when she died. For all the gifts she offered so freely, for a life lived with so much grace, merci beaucoup, Eula Mae.