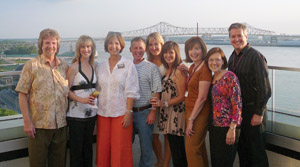 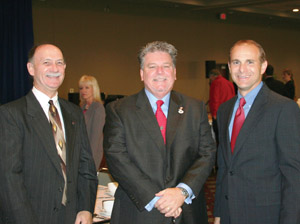 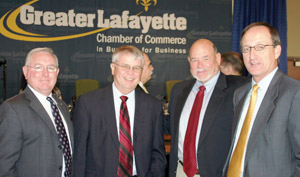 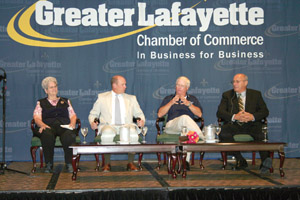 Leadership Louisiana UL grads have strong loyalties to their alma mater, and also to their community and state. Nine alumni were selected to be a part of the 2008 class of Louisiana Leadership, sponsored by CABL. The 20th class includes 45 leaders from around the state representing civic, business, government, university, nonprofit, news media, professional and cultural sectors. The program is designed to educate, explore innovative solutions, provide opportunities for cultural exchanges, and establish connections with other leaders. Workshops and retreats are held six times a year throughout the state. UL alums were photographed at the top of the Shaw Center in Baton Rouge at the first meeting and tour of the Capital City. The closing retreat will be in Lafayette in November. For more information visit www.cabl.org

The Greater Lafayette Chamber of Commerce’s “Conversation with Lafayette Parish Mayors” brought out the growing pains communities are facing. Mayors from Lafayette, Broussard, Youngsville and Scott discussed problems with adequate city services and alleviating traffic congestion and overcrowded schools. The Eggs ’N’ Issues event July 8 at the Cajundome, sponsored by C.H. Fenstermaker and Associates, gave mayors a forum to address issues and share ideas. Youngsville Mayor Wilson Viator reports one new family moves into his city each day. Broussard Mayor Charles Langlinais notes the unprecedented growth is affecting road conditions and infrastructure. Mayor-President Joey Durel stressed that the I-49 extension through Lafayette would greatly alleviate many traffic problems. The idea of a toll road came up, but Mayor Hazel Myers of Scott voiced concerns the cost would prohibit some residents from benefiting. No easy answers for these ongoing problems that face the parish. Congratulations to the Chamber for winning an Acadiana Open Channel Viddy Award June 21. “The Business Connection,” produced by Chamber staff members Nicole DesOrmeaux, Erin Kelley and Cydra Wingerter, won the “Best Taped Program” award. The monthly program hosted by Chamber President and CEO Rob Guidry features business leaders discussing topics relevant to the community.

The Giles Automotive 99 cent gas promotion on June 30 made headlines and caught the attention of national news media. More important, it gave 501 Acadiana drivers a much-needed mid-summer boost in the gas tank. The amazing response to the 99 cent gas prompted Nissan-Volvo auto dealer Bob Giles to donate proceeds to Acadiana Outreach, where he serves as chairman of the board. The promotion began as a way to give back to the community and create awareness of the new Nissan facility on Johnston Street, but it grew into something more as Giles talked with people waiting in line and realized what the savings meant to them. At the end of a day that stretched from 6 a.m. to about 11 p.m., Giles donated more than $5,000 to Acadiana Outreach. “It wasn’t inexpensive,” says Giles. “We paid almost $4 a gallon for the gas, but I would do it all over even if it cost four times as much.” Valerie Keller, Acadiana Outreach CEO, says the money will help the working poor who generally have a longer commute to work because affordable housing is located farther out of the city. Giles has a history of magnanimous gestures to benefit the community, from 18 wheelers full of dry ice for hurricane relief to providing busses to give National Guard soldiers one more trip home before heading to Iraq. “Our business has been great, and this area has been wonderful to me and my family, and I want to give back,” Giles says. 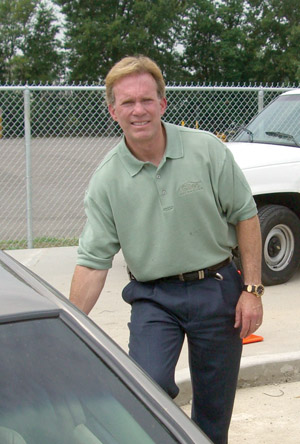 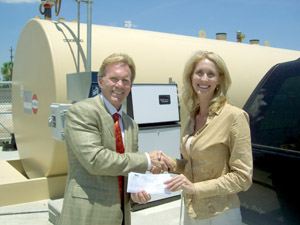 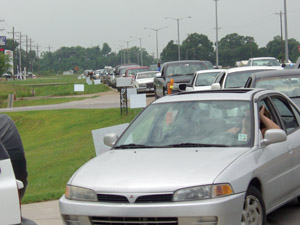