There’s a point to Swing Vote that’s well taken but not delivered well. 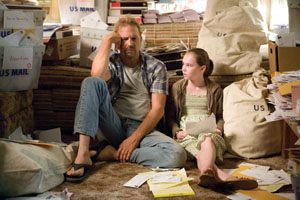 One man, one vote is the way it’s supposed to be, but maybe no one ever counted on a Bud Johnson. Bud’s just a good ol’ boy in the most apolitical sense of the word imaginable. His trucker hat perched lopsided atop his scraggly, ever-tousled hair, Bud smiles his goofy smile and sleepwalks through what passes for his life. It’s not, after all, like he has that much to actually wake up and pay attention to. Days goofing off at his chicken-factory job, nights shooting pool and whiskey at the town bar. His Willie Nelson tribute band broke up long ago, and his wife walked out at some point. So he chases strippers and sleeps in his truck when he’s too drunk to make it home to his trailer. He doesn’t know who he’s going to vote for because he honestly didn’t even know there was a presidential election going on.

All of which would be marginally charming in a loveable loser kind of way if Bud didn’t have such huge responsibilities: a grade-school, whipsmart daughter named Molly — and the single deciding vote in that very same election of which he’s managed to remain so blissfully unaware. Until now.

Somehow, the rest of the country’s votes have led to an almost-exact electoral tie, and New Mexico’s five electoral votes will be decisive. As the votes come in, election officials realize that they can’t certify all of the votes in tiny Texico — one machine misfired somehow, so the vote of Bud Johnson was never recorded.

Once an ambitious local reporter (Paula Patton) breaks the story that the determining vote belongs to Bud, the circus comes to town. The news networks show up in droves, just barely beating the arrivals of the candidates themselves. Incumbent President Andrew Boone (Kelsey Grammer) and campaign manager Martin Fox (Stanley Tucci) park Air Force One on a local runway; his challenger Donald Greenleaf (Dennis Hopper) and right-hand-man Art Crumb (Nathan Lane) set up shop in an (aptly) abandoned storefront. Suddenly, the two campaigns have an audience of one.

Bud is bewildered. Thankful that the New Mexico secretary of state and attorney general aren’t representatives of child services when they show up in the middle of the night, he plays along with the charade that it was his vote that wasn’t recorded. Turns out, it was actually Molly’s. Bud was supposed to show up and vote so she could write a report for school. When he flaked, she snuck in and tried to vote for him before the glitch occurred. But it’s too late to go back now; the games have officially begun. At first, Bud relishes the attention, but things get harder for him (and for Molly) the farther things go. Can Molly school her slacker father fast enough? Will the enterprising anchor-in-the-making reveal the truth? How does democracy withstand the messy materialization of one of its most democratic ideals?

Swing Vote, written by Jason Richman and director Joshua Michael Stern, is a strange sweet-and-sour mixture. At its core, it wants to be both an idealistic celebration of citizenship and a sharp-knived indictment of what stands in for public process these days. And there are moments when both work, but unevenly, as start-and-stop as Bud’s stuttering, thoughtless answers to reporters.

Molly is the sweet heart of Swing Vote, and young Madeline Carroll ably moves back and forth from grown-up exasperation with her father to the fragile wishfulness of a child for her long-lost mother. Bud’s the kind of guy you like, but against your will. When he finally gets his act together for the film’s finale, Costner’s earnest enthusiasm, his Tin Cup-titude, is irresistible.

It’s everything around these moments that struggles. Bud’s early neglect of Molly is appalling; he’s doing the best that he can — better than mom Mare Winningham could, we soon discover — but that doesn’t really make his detached self-centeredness any less despicable. He’s a hollow man being played for lowest-common-denominator laughs at a child’s expense.

Similarly, a film celebrating the glory and worth of a single vote starts out with a notion of fraud that it never escapes. Campaign staffers are caricatured as the ruthless ones, with the good-hearted but hapless candidates simply led astray. Richman and Stern might have thought they were achieving nuanced complexity; all they wind up with, though, is a mighty mess.

There’s something important that the duo wanted to say with Swing Vote, a point well taken, if not well-delivered. It’s in vogue to decry the state of the system without acknowledging our own complicity in its demise. It’s a contract, this citizenship of ours. And while the candidates owe the public honesty and integrity and big ideas, we owe them something, too. We owe it to them (and ourselves and each other) to be informed and engaged and active in our government and our world. To be, in other words, a much better than Bud than the one has built.