Foti casts for a scapegoat 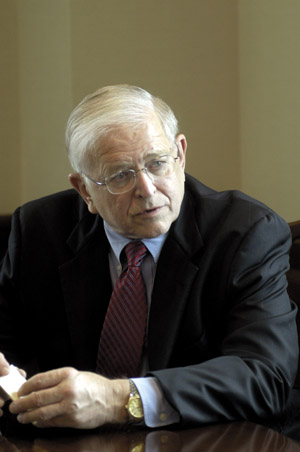 Democratic Attorney General Charles Foti must be taking public relations lessons from Republican U.S. Sen. David Vitter. Immediately after a New Orleans grand jury refused to indict Dr. Anna Pou on homicide charges in the Medical Memorial Hospital/Katrina case, Foti put out a one-sentence statement that said, "The dedicated employees of the Attorney General's Office have done their duty as required by federal and state law, and I am very proud of our efforts on behalf of the victims and their families."

After the grand jury closed the door on his always-shaky case, Foti's use of the word "victims" in his statement was telling, as he continued to publicly imply that Pou and nurses Lori Budo and Cheri Landry killed patients in Memorial Medical Hospital in the hellish days after Katrina made landfall. The honorable thing for Foti to do would have been to accept his defeat and move on ' but a few hours after issuing his statement, Foti decided to ratchet up his character attacks on Pou and the two nurses. At a Baton Rouge press conference, Foti claimed he had medical experts willing to testify that the patient deaths were homicides ' while conveniently neglecting to mention that New Orleans coroner Frank Minyard, after exhaustive testing and consultation with top forensic experts, had already said that the physical evidence did not support the homicide charges.

Foti then tried to place the blame on embattled New Orleans District Attorney Eddie Jordan, a tactic that might ordinarily fly if it wasn't so transparent and Jordan wasn't such an easy target as scapegoat.

The next day, Foti took the rare step of releasing a number of "investigatory" documents compiled by his office in the case to press outlets. The files detail the findings of five experts used by Foti's office. It's standard practice for private attorneys to cherry-pick and pay expert witnesses for preparatory work and trial testimony, and The Times-Picayune reported that criminal pathologist Dr. Cyril H. Wecht says he charged Foti's office $300 an hour for his work on the Memorial Katrina case and was unsure of the total amount he earned for working for Foti's office.

Of all the expert witnesses that Foti could have used in this case, Wecht is a controversial choice. Wecht is currently under an 84-count federal grand jury indictment that alleges mail and wire fraud and also accuses Wecht of bartering unclaimed bodies in exchange for use of lab space at Carlow University.

In addition to Wecht, another expert Foti used was Dr. Michael Baden, host of the HBO television show Autopsy. Baden is perhaps best known for being an expert witness for O.J. Simpson's defense, and here's how USA Today encapsulated Baden's work in that case:

"Contradicted nearly all of pathologist Spitz's opinions about fingernail wounds, thinks Simpson cut hand on glass shards; believes multiple killers used multiple weapons; killers should have gotten blood on skin and clothes; Goldman could have remained on his feet struggling with his killer for two or three minutes after being stabbed; didn't recall telling national TV audience that Goldman remained standing for 10 minutes; reviewed film clip and said difference between two, three and five minutes was inconsequential because it was still five to 10 minutes from first stab wound to death."

Those experts' notoriety aside, their opinions that the Memorial deaths were homicide might be moot in the criminal case against Dr. Pou, but a number of civil cases are still pending against Pou ' and now the plaintiffs' attorneys in those cases could swoop in and try and use the expert opinions paid for by Foti's office. As Dr. Wecht's $300-an-hour rate illustrates, expert witnesses don't come cheap. So by releasing his internal documents, Foti ' and by extension, we Louisiana taxpayers that fund his office ' could be subsidizing a significant component of the legal costs for Pou's opposition in the civil cases.

The New Orleans grand jury's refusal to indict Pou is the most stinging rebuke of Foti's career, and he's not handling it well. Foti grew angry at last week's press conference when a reporter asked about his re-election prospects; "I really don't care how it affects my chances for election," he snapped.

Foti might not care, but I suspect a lot of voters will care when they head to the voting booths on Oct. 20. That's assuming, of course, that Foti still intends to run for re-election and still believes that the citizens of Louisiana trust his judgment as attorney general.