A familiar name comes home to leave his markon the walls of La Fonda — and it’s all for a good cause. 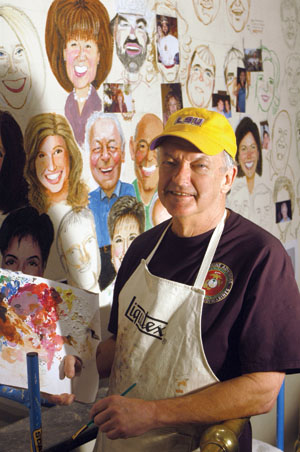 Richard Chappuis, Brother Marine, Floyd LeBleu, Lou King Patin, Pat Olson, the Favalora brothers and a host of other loyal La Fonda patrons are finally getting their caricatures painted on the walls of the popular Mexican eatery — more than four decades after the late Leebob Cox traveled to Mexico City to track down itinerant painter Luis Amendolla and eight years after Amendolla’s death.

This time the artist has been imported from Panama, though he’s no stranger to Lafayette. The paintbrush is in the hands of 62-year-old Lafayette native Rocky Perkins who, after losing his New Orleans studio and its contents to Hurricane Katrina, traveled to Panama to paint President Martin Torrijos, the first lady and salsa singer Rubén Blades and decided to stay.

The accomplished portrait painter, who also has a studio in New York City, has been on his ladder working and chatting with customers in the bar for the past several weeks and hopes to finish the wall (to the right of the bar leading to the restrooms) in about a month. He arrives early every day, except for Fridays. “I learned my lesson, the noise, the crowd,” he says — and paints till late in the evening. “I’m here because I can match Mr. Amendolla’s style,” Perkins says. “And I can kick it up a notch,” he says with a laugh. “You know you have to have an ego in this business.”

He’s painting 90 caricatures — every one of them for a good cause. The project is a fund-raiser for Hospice of Acadiana and HonorAir, a volunteeer organization that flies WWII vets to the WWII Memorial in D.C. Each portrait costs $500, which is benefitting the two nonprofits. “We wrote the check already,” says La Fonda owner/manager Gabe Bako. “We’re collecting on the back end.”

Bako says La Fonda founder Leebob Cox, who died in February, would be pleased with how well the new paintings fit with the old. “We discussed it prior to his passing,” Bako says. “He would love it.”

The work is also paying off for the artist himself. “It looks like I’m picking up a lot of clients here,” says Perkins, who will return later in the year to paint the area over the restrooms, bringing the total number of caricatures added to about 140. He’s also considering moving back to Lafayette part time. “I’ve lived in 30 states and in Russia, London, and there is no place like Lafayette,” Perkins says. “Of course, I gained about 10 pounds in 12 days.”

For more information on Rocky Perkins and his works, visit his Web site at www.aartist.com or stop by La Fonda on Johnston Street.