Bruce Conque is leaving the city-parish council behind but will likely remain an active player in local politics. 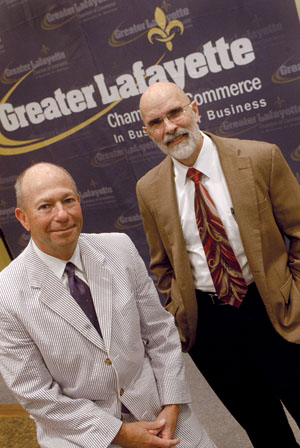 Going into a recent meeting with Greater Lafayette Chamber of Commerce President Rob Guidry, the last thing on Bruce Conque’s mind was walking out with a new job. The Lafayette City-Parish Councilman was seeking Guidry’s advice on expanding his public relations business and wanted to discuss general issues with the chamber and the council. As Guidry listened to Conque discuss his work, he stopped the councilman and asked: “So, you haven’t heard about our position?”

Guidry had already conducted a half dozen exploratory interviews to fill a new vice president’s job the chamber created to help oversee public relations and government affairs; the search had been under way for about six months. With an insider’s knowledge of local government, and decades worth of public relations experience, Conque seemed uniquely qualified for the post.

In the new role, Conque will be working on outreach and public relations with the chamber’s existing staff. He also will help the organization in its goal to be more involved in public affairs and lobbying.

“The [chamber] board has always indicated,” Guidry says, “especially in the past couple of years, that they wanted to take the chamber to the next level of excellence. And with the complexity of our agenda and the aggressiveness of our agenda, we needed to add an experienced staffer, and Bruce is suited ideally to contribute to those ends.”

The organization’s lofty agenda involves promoting Acadiana as a region in order to coordinate multi-parish road and development issues, and better leveraging influence in the state Legislature. With so many towns and varied interests, Acadiana has a history of being Balkanized, making the task of identifying common needs and speaking with one voice difficult. Conque has some experience in that area. For the past 18 months, he’s been a part of the chamber’s task force for its regionalism initiative. He also headed the Council of Governments — an organization comprised of representatives of all the parish’s separate governmening bodies — for three years. On the council, Conque pushed the idea of creating a multi-parish drainage district. “That’s one of the things that I found most appealing about the new job,” Conque says, “is to work toward things on a more regional basis. I’m still going to be very involved in government.”

Peter Yuan, president of IberiaBank and chair of the chamber’s regionalism committee, calls the new position “a natural extension” of some of the work Conque was already doing. “It’s a big plus,” Yuan says. “I see Bruce wearing multiple hats. Obviously, we’re going to try and take advantage of all his strengths and skill sets.”

Last week, Conque announced he would be resigning from the council to accept the new job and avoid any complications that may arise from his new role as a local government liaison for the chamber. He says another major factor in his decision was the state’s new ethics disclosure laws for public officials, which remain murky and have been a potential impediment to his public relations business.

“It’s the uncertainty of it,” Conque says. “To this day we don’t know what all needs to be disclosed. Also, I’m just starting to realize some potential conflicts of interest in seeking new clients.”

Conque will remain on the council through Sept. 30, the last day of budget hearings. The council will have until Oct. 15 to appoint an interim replacement for Conque.

The senior councilman and only holdover from the previous city-parish council, which saw five of its members forced out by term limits, Conque’s resignation means the council will have all freshmen members.

“We’re losing obviously the only experience that we had on the council,” says City-Parish President Joey Durel, “and somebody who I believe always had the right motives in mind. All he ever did was look at issues and base his decisions on what he thought was best for this community and best for this government.”

Meticulous and analytical, Conque had a reputation for always doing his homework, even when it came to the more mundane issues before the council. He made zoning regulations a priority and helped spearhead a new city sign ordinance and an updated a parish-wide drainage ordinance. In his first two years on the council, Conque also was influential in pushing strict new guidelines for council members’ travel and dining expenses — a move that upset some veteran council members.

A “young 62,” Conque is energetic and ready to embrace the new role. “Most guys my age are looking to retire,” he says with a laugh. “This is a whole new aspect of my career.”

In leaving the council, Conque may also be setting aside his well-known ambitions for higher office. “I did have ambitions for the parish presidency,” he says. “There’s no telling what could happen. I’m certainly going to maintain my interest in the political process. For right now, my future is the chamber.”

Seeing a potential future opponent stepping out of the political arena brings a light-hearted smile to Durel’s face.

“Right now, I just look forward to continue working with him,” Durel says. “And I hope we’re always on the same team."