In attacking Democratic Sen. Mary Landrieu on energy issues, Treasurer John Kennedy has picked up on a national GOP strategy that works better in Minnesota than it does in Louisiana. 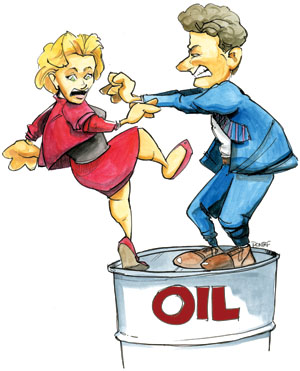 When you put aside the spin and positioning, ignore the special interests and pundits, there are always undeniable truths — even in politics. For instance, labeling incumbent U.S. Sen. Mary Landrieu as anti-oil is like calling Rush Limbaugh a liberal. After all, she’s a member of a 10-person, bipartisan energy caucus, the author of a bill that opened up 8.3 million new acres of the Gulf of Mexico to drilling and the only Democrat to vote with Republicans against two Democratic, watered-down energy bills this term.

If anything, when it comes to energy issues, Landrieu, a New Orleans Democrat, should be stripped of her donkey pin. She’s a traitor to the mainline mantra, which isn’t surprising since she represents Louisiana. Weeks ago on CNBC’s Kudlow & Company, Senate Minority Leader Mitch McConnell, a Republican from Kentucky, referred to Landrieu as “an exception” to the anti-drilling, Democratic establishment. Mark Miller, regional director for the Independent Petroleum Association of America, also recently anointed Landrieu “our favorite senator.”

Nonetheless, Republican state Treasurer John Kennedy, Landrieu’s opponent this fall, is swinging away and issuing press releases that contend Landrieu “opposes pro-drilling legislation.” While Kennedy has his varied reasons for making such claims, the attacks are based more on what the Republican Party is calling for than anything else. It’s a national strategy that mirrors the assaults Sen. John McCain of Arizona, the presumptive GOP nominee for president, is firing off at fellow Sen. Barack Obama of Illinois, his Democratic counterpart.

Such a strategy, regardless of the candidates and extraneous politics, just won’t fly in certain locales, especially those that hug the coast. Chris John, a former Democratic congressman who now serves as president of the Louisiana Mid-Continent Oil and Gas Association, says the approach is harder to implement than most Republicans think. “My experience in state and federal government is that energy issues are more geographic than partisan,” John says. “You have both Democrats and Republicans in places like New York and Michigan who are not pro-oil, and then you have oil-producing states where both Republicans and Democrats have always supported the industry.”

So, aside from toeing the party line and following national talking points, why is Kennedy taking these curious shots at Landrieu? In part, his team is hoping to align Landrieu with Obama. Republicans attempted to do the same earlier this year in congressional races in Mississippi and closer to home in Baton Rouge, with absolutely no success. “The Kennedy camp is trying to take a national Democrat, a black, liberal, Democrat, which is a classic, Southern political strategy, and link him to the local Democrat in an attempt to say that these individuals hold the same views that are far more extreme than our constituents,” says Joshua Stockley, former president of the Louisiana Political Science Association and professor of government at Nicholls State University in Thibodaux.

Kennedy kicked off the back-and-forth a few weeks ago when he alleged that Landrieu voted to “[block] pro-production, Outer Continental Shelf legislation.” He called her “all talk” for not supporting a bill that he interpreted as opening up drilling. “When Mary Landrieu has a real chance to do something on energy, she refuses to break from the extremists in her own party,” Kennedy says.

The vote in question, however, was a cloture vote, a procedural move that was taken to bring the “Stop Excessive Energy Speculation Act of 2008” to a vote. While there was an OCS amendment to the bill pending, it has never been voted on or debated. Clearly, Landrieu’s vote had nothing to do with the prospects of opening up the OCS to drilling, but Kennedy’s campaign took the vote to mean Landrieu was ignoring the amendment — quite a stretch.

Or is it? Kennedy may have ground to stand on when accusing Landrieu of playing politics. For her part, Landrieu could have pushed harder to have the OCS provision attached. But from a purely political perspective, it wouldn’t have been in her best interest.

Here’s why: congressional Republicans contend Landrieu’s boss on the floor, Senate Majority Leader Harry Reid, originally agreed to take on the OCS measure as one of four-agreed-upon GOP amendments. But Reid later reneged and started making procedural moves like the cloture vote so he could handpick the amendments he really wanted. As a consequence, the Nevada Democrat’s flip-flop sent the OCS amendment to the cutting room floor.

In pushing to have it included in the speculation bill anyway, Landrieu would have had to buck her majority leader during a year when campaign cash will be at premium. Furthermore, the OCS amendment was offered by Republican David Vitter, Louisiana’s junior senator. In helping Vitter with his amendment, Landrieu would have been handing over one of her trademark issues to a conservative colleague with whom she shares less-than-perfect relations.

Then again, it may be a smidge of political speculation regarding an oil speculation bill. Asked if Landrieu would support amending the bill — any bill — to include opening up the Gulf of Mexico to additional drilling, Landrieu campaign spokesman Scott Schneider said it would be an easy decision for the senior senator. “Certainly,” he says, “she would.”

The real intent of the bill, which Landrieu supports, is to rein in oil speculation by prohibiting traders from routing transactions through offshore markets and forcing traders to put down more money now to trade on contracts in the future. According to several published reports, there are many analysts who subscribe to the theory that speculators’ actions are responsible for as much as 50 percent of recent gasoline price increases.

And therein resides the other reason for Kennedy’s recent tirades. Gas prices, hovering near or over $4 per gallon, are a thorn in the side of the average voter. Kennedy knows this, as does Landrieu, and both want to capitalize on the issue. There’s very little, though, that either can do — as a senator or as a state treasurer — about the gross inflation at the pumps, at least any time soon. For instance, according to a new U.S. Department of Energy report, Congress could open all areas of America’s coast to drilling and exploration and consumers wouldn’t see an impact on prices before 2030.

Kennedy and Landrieu have also come to blows over legislation that would have increased domestic production by 800 million barrels or more each year by allowing western states to grab oil from shale, or sealed rock. In published reports, Landrieu said she voted against the bill at the request of Sen. Ken Salazar, a Colorado Democrat, who supported her earlier efforts to increase Louisiana’s share of offshore royalties by billions of dollars — money that will eventually be directed to coastal restoration and hurricane protection efforts.

Landrieu has also said she had concerns about opening up an area to drilling when the technology might not even exist to heat the shale to the temperature needed to produce oil. Moreover, both opponents and proponents agree that 2015 will be the earliest date when oil can be extracted from the shale.

For now, Kennedy and Landrieu will continue to bicker over energy issues and muddy them enough that the average voter doesn’t know which way is up. But no matter which politico wins the fall election, you can rest assured that Louisiana will have yet another pro-oil vote in Congress. Such is the way of the Bayou State. Voters just have to decide whether that pro-oil lawmaker should be a Republican or a Democrat.

Maybe the candidates will stray from national strategies and toss out a few non-energy issues in coming weeks to make that choice easier, but don’t bet the farm.