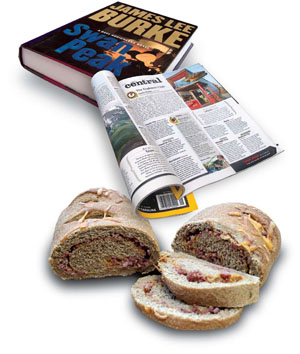 SWAN PEAK
When you’re Dave Robicheaux, you can’t even take a vacation. Novelist James Lee Burke sends New Iberia’s favorite fictional detective to Missoula, Mont., for a little R&R, but before his buddy Clete Purcell can get a dry fly on the water, the bad guys roll over his fishing pole. So begins Swan Peak, the 17th installment in the long running saga of Robicheaux and Purcell’s attempts to fight the good fight in a world descending into moral and environmental degradation. The setting is Burke’s second home, a ranch house on a dead end road in the verdant Bitterroot Valley of southwestern Montana. College students, evangelical preachers, Texas oil men, prison wardens and country western singers all mix it up, while Robicheaux struggles to stay out of the fray. Of course, our hero can’t stand by while the forces of evil gather. This is one Dave Robicheaux ride you don’t want to miss. Swan Peak retails for $25 at local booksellers. — Mary Tutwiler

THE EUNICE LINK
Great Harvest Bread Co. owner Michelle MacFadyen was raised on smoked sausage from Johnson’s Grocery. So it was a natural connection for her to begin buying up sausage at Johnson’s Boucaniere, where fellow Eunice native Lori Johnson Walls is carrying on the Johnson family tradition of smoked meats. At Great Harvest, MacFadyen incorporates the hometown specialty into her own smoked sausage cheddar bread, baked fresh every Thursday. Rings of savory ground sausage and chunks of cheese pack more flavor into Great Harvest’s specialty whole wheat bread. Try it toasted alongside your morning coffee for a delicious Cajun breakfast. — Nathan Stubbs

PADDLE LAFAYETTE
Live and play. That’s what we know Lafayette is good at, and now so does National Geographic Adventure. The September issue has an article titled “Where to Live and Play: the fifty next great adventure towns.” Lafayette ranks among the up-and-coming 50 as the best place in the south central region for paddlers — as in canoeing. “Crawfish boils are always a social affair. And lately so are kayaking and backpacking forays into Acadiana Cajun-Creole country, courtesy of Pack & Paddle. The city is booming with jobs too; it’s one of the few in Louisiana with population growth. Cruise the Atchafalaya Basin bayous and chow down on crawfish. Population: 114,214. Median home price: $171,900.” Some other towns that made the cut: Hood River, Ore.; Malibu, Calif.; Ogden, Utah; Missoula, Mont.; San Antonio, Texas; Chattanooga, Tenn.; Boston, Mass.; and Islamorada, Fla. — Mary Tutwiler