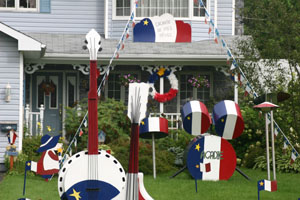 Moncton's all-French radio station is CKOI, 99.9 FM. So far this morning I've heard some French rock and folk, but mostly French country-western. Evidentially Georges Belliveau is a big country-western star. Driving around the town, the air is crisp, clean and salty. We're near the Bay of Fundy, with its enormous tides, and you can smell the salt from the sea. We step out the car to see a house decorated in red, white, blue and yellow giant musical instruments for the Acadian Festival, which runs from Aug. 1-15 on the Acadian Peninsula, up in northern New Brunswick.

Percy Mallet is our guide. He's from Shippagan, the center of Acadian country. "Here in New Brunswick, we were living in French, but not showing it off," he says, explaining how the French speakers got along with the English government. The Acadians were under pressure from the Canadian government, as the Cajuns were in Louisiana, to speak only English. In the 1960s, the first Acadian premier of New Brunswick created a program called Chances Egal pour Tous (equal opportunity for everyone) to support the rights of the Acadians to live in their language and culture. Taxes, passed to support dual school and medical systems, allowed the residents of New Brunswick to choose which language they wanted to speak, and by law, New Brunswick became bilingual. Every public sign is printed in both languages.

The reason Acadians still remain in eastern Canada after the Grand Derangement of 1755 is that some of the families, aided by the Micmaq Indians, fled from the British deportation to the far north, to a peninsula that juts out into the Gulf of St. Lawrence. They lived, as Mallet says, quietly in French, making little noise until 1955. That year marked the 200th anniversary of the deportation. On Aug. 15, the day of the Assumption of the Virgin Mary, the patron saint of the Acadians, they went out into the streets of all the towns of Canadian Acadia. At precisely 6 p.m., the Acadians began banging on pots and pans, or anything they could find. The big noise, 86-year-old Acadian activist Donatien Gaudet explained, "was to tell the world that we are still living." Dubbed the Tintamarre, the celebration last year drew 25,000 visitors to the small town. This year, add a handful of Cajuns, and let's see how much noise we can make.