I can understand why the Cajuns still long for the lost paradise of Acadie. The Acadian Peninsula is a beautiful place - forests of spruce and larch, meadows filled with wildflowers, and the wide coastal rivers and bays that cut through the landscape. Houses are small, lawns neat, and just like in Acadiana, boats are parked in the yard. The work here in the past was mostly farming and fishing, and judging by the fleet of lobster and crab boats in every working harbor, it still is that way.

Our first stop this morning was a visit to the New Brunswick Aquarium and Marine Center. Harbor seals circle the pool, doing tricks for mackerel heads, but the best entertainment was Bob Moore of KLFY-TV 10, attempting to do his "get some rice" routine with two unsuspecting aquarium guides and a Royal Blue lobster from the rare species tank. You'll have to watch Passe Partout next week to catch the spot. After that, naturally, we had a lunch of lobster rolls. 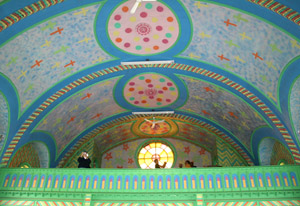 Trippy priests were next on the agenda. In 1968, Father Gerard D'Astous, the priest at Eglise Saint-Cecile, had a vision that he should decorate the inside of his large, wooden, 1931 church. He must have been dreaming of tangerine trees and marmalade skies. While Fr. D'Astous had never painted anything before, the next thing anybody knew, he had bought out the hardware store of aqua, orange, and yellow spray paint and began striping the walls. When he got to the ceiling, he conceived that the souls of his parishioners who had passed away should be represented by pink crosses. Above the choir, he painted dainty birthday cakes on the ceiling; the front of the choir rail is lit with lots of glowing candles. It's a happy happy church, recognized, after some indignation from his congregation, as a masterpiece of folk art.

The second church we entered held a different kind of awe for the Acadians. Zachary Richard is in town, and he was performing at a fund raiser in the village of Tracadie. Under a nave as lofty as St. John's in Lafayette, Richard crooned ballads like "Cape Enrage" and "Au bord du Lac Bijou." The audience knew every word of every song. The church was packed, standing room only. There was a vibrant communion between audience and singer, a deep understanding of the sorrows of the past, combined with a sense of beauty and joy in their shared heritage. As often as I've seen Richard perform in Lafayette, I've never understood the passion behind his songs as strongly as I did last night.