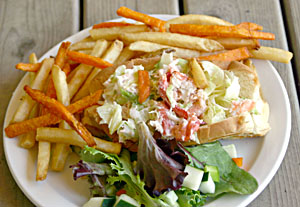 We are staying at the 1891 Hotel Paulin, where the Acadian flag flies from the third story dormer. Third generation owner Gerard Paulin and his partner Karen Mersereau are melding the historic accommodations with a dazzling display of dinner dishes based on local ingredients. Eating at the Hotel Paulin is an education in the riches of the sea and the farm, the traditional occupations of the Acadian residents. Summertime is lobster and crab season, and Mersereau takes advantage of the bounty. Shellfish turn up in stews based on bouillabaisse, in creamy linguine, sauteed in a rum butter sauce, as crab cake and tucked into flaky tarts. Local lamb, traditional chicken and dumplings, artisan cheeses and lettuces from the hotel's gardens are showcased on the menu. Dessert is another course in all things Acadian, from the traditional sugar pie to a Cajun-pleasing blueberry bread pudding with rum sauce. Mersereau and Paulin bent over backwards to help us, be it with Internet connections or home remedies for insect bites. And the hotel, located in the heart of Caraquet, made a great base for exploring the peninsula.

As a counterpoint to Mersereau's upscale cooking, most of the restaurants on the peninsula serve simpler, but not lesser, fare. It took us a while to relinquish the Tony Chachere's seasoning, but slowly our palates adjusted to food with less fire. "Not too much salt," was a mantra, "you should be able to taste the seafood." Lobster turns up everywhere: in breakfast omelets, tossed with a bit of mayonnaise and rolled into a hot dog bun for lunch, or steamed whole for dinner. Scallops, mussels and clams, sauteed, steamed or fried are local favorites. And summer is oyster season in New Brunswick. The shallow bays are fertile grounds for farming oysters in baskets suspended in the top third of the water column. The oysters grow more quickly and are easier to harvest. We tasted an oyster named for the hero of the Acadian resistance, Beausoleil Broussard, who fought on in Nova Scotia for several years before following his kin to Louisiana. The small BeauSoleil oysters, harvested in bays outside of Shippigan and Bouctouche, taste like a sweet briny mouthful of the sea.