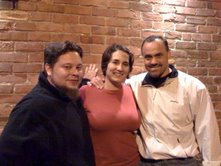 For the Cajun members of our trip who could trace their ancestry back to Acadia, the trip to New Brunswick was a revelation. “I grew up speaking French with my parents and grandparents,” says Passe Partout’s Bob Moore. “My grandmother spoke almost no English whatsoever.” Moore’s family are Baudoins, Broussards and LeBlancs from around Erath. “They are proud people,” he says. “But they probably didn’t understand their ancestry.”

Going into the restaurants and stores of the Acadian Peninsula delighted Moore. “The first thing people did was speak French. Only if you didn’t speak French did they switch to English. Little kids, teenagers responding in French--it blows my mind. A couple to times it brought tears to my eyes.”

Lucius Fontenot and Valerie Broussard are both in their 20s. While French was spoken by their grandparents, it was only passed down to them in snippets, neither one of them was fluent. Both of them chose to pursue their heritage, in France and at the French Immersion program at the University of Sainte Anne, in Nova Scotia. So they were eager to be in a place where they could immerse themselves again. “It was a special place,” says Fontenot. “I felt extremely prideful. When we told people we were from Louisiana, their eyes would light up.”

Fontenot and Broussard make a point of getting together with Francophone friends at least once a month in Lafayette. “I feel confident of my French, who I am and where I come from. Those who speak French have an advantage,” adds Broussard.