A year after being rocked by his ties to a D.C. prostitution ring, Sen. David Vitter is back on the state circuit — and back in the good graces of many Republicans. 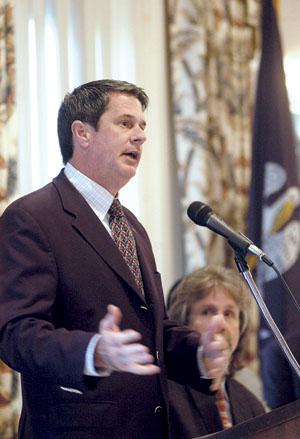 Introducing David Vitter before a Greater Lafayette Chamber of Commerce breakfast event last week, Robbie Bush had high praise for the U.S. senator. The chamber chairman trumpeted Vitter as “an outspoken reformer,” someone “who has always been committed to putting Louisiana first” and a man who “stands for our mainstream values.” Vitter sat to Bush’s immediate right, in between two of Lafayette’s more prominent business leaders, longtime chamber President Rob Guidry and Kam Movassaghi, former state Department of Transportation and Development secretary who is now president of C.H. Fenstermaker & Associates. Prior to the start of the event, Vitter worked the room, stopping by each table, shaking hands and sharing well wishes. He drank coffee, ate little and sat quietly thinking over his talking points before getting up to address the room.

Just over a year after news broke about Vitter’s connections to a D.C. prostitution ring, threatening to halt his political career, it’s largely business as usual for Louisiana’s junior senator. With Congress in recess, Vitter is out making the rounds, renewing relationships while beginning to gear up for his re-election campaign in 2010. He appears reserved but maintains his earnest manner and repeatedly expresses a desire to listen to constituents’ concerns. His speeches are issues driven, focusing on the nation’s energy crisis and funding for major infrastructure needs like I-49 South.

City-Parish President Joey Durel says Vitter has been “a great friend to Lafayette,” assisting with key issues like the city’s challenge of FEMA’s recently redrawn flood maps, which included a number of large development areas in floodways, as well as Vitter’s continuing support for Lafayette Utilities System’s fiber-to-the-home initiative.

“From that standpoint, most of what I get from people I talk to is his support is still very strong,” Durel says. “It may be that the scandal has helped make him a little kinder and gentler in some ways. But I think overall, from a fiscal standpoint, basic conservative principles, he definitely represents this area very, very well.” (Durel’s daughter, Nicole Hebert, serves as Vitter’s southwest regional director for the state.) Sterling LeJeune, a local Republican and a commercial real estate agent with Latter & Blum who also works as a contract lobbyist, has known Vitter for several years. “[Vitter] has done his job well in Washington,” LeJeune says. “I think that his support is solid, but I think a lot of it is under the radar. I think David still has the support of the great silent majority out there.”

Polls following the scandal showed Vitter’s support relatively stable among conservatives, with prominent local business leaders like Bill Fenstermaker, Charlie Moncla, Dwight Andrus and Clay Allen continuing to make contributions to his campaign. The first Republican elected to the Senate from Louisiana since Reconstruction, Vitter has burnished his conservative credentials in the Senate. He’s been an outspoken opponent of gay marriage and amnesty for illegal immigrants; he’s also been a supporter of the Iraq war and for making President Bush’s tax cuts permanent. Occasionally, he has bucked his party in cases where Louisiana’s interests were at stake. He recently voted for both the Water Resources Development Act and the Farm Bill. (Bush opposed both bills due to their high spending costs).

The scandal has clearly impacted Vitter’s demeanor. While in Congress and in the state Legislature, he had a reputation as a lone wolf, never shy about pointing fingers or stepping on other elected officials toes. Still prone to speak his mind, Vitter now seems more reserved. “He’s a lot more humble,” LeJeune says.  “He’s a lot more discretionary about pointing fingers. David’s learned to keep the powder dry till the target’s real clean.”

At last week’s chamber breakfast, one attendee asked Vitter about his opposition to a bill being pushed by labor unions and the Democratic Party that would relax rules about how union votes could be taken. Vitter had warned that the bill had the potential to dramatically reshape America’s business climate as well as its political landscape. The questioner wanted to know the likelihood of Sen. Mary Landrieu dropping her support for the bill. “I’m certainly not going to speak for Mary,” Vitter said. “And I don’t want to get into a partisan diatribe.” He then noted that politicians don’t often switch positions on heavily-lobbied issues such as this one and got in this dig, which drew laughs: “The first rule of politics is that it’s easier to change bodies than it is to change hearts or minds.”

In addition to the chamber breakfast, Vitter also made appearances last week before the Lafayette City-Parish Council during one of its budget hearings and the city’s Zydetech e-government symposium and attended the John Kennedy fund-raiser with first lady Laura Bush. On Tuesday of this week, Vitter hosted a meet and greet at a la carte and is scheduled to be back in Lafayette Thursday for one of a series of energy forums he’s holding in cities across the state.

In the months following Vitter’s admission to “a very serious sin in my past,” he was seldom seen out in public, aside from carefully staged events, often refusing probing questions about why his number appeared in the phone records of the late Deborah Jeane Palfrey, known as the “D.C. madam.” Vitter has said the matter remains a personal one — that he has asked for and received forgiveness from his wife and God in marriage counseling and confession.

Vitter re-emerged in the public eye this year. He’s already held a series of town hall meetings and earlier this summer sent out an e-mail noting he was preparing to ramp up his re-election campaign: “Looking ahead to 2010, I would like to use these calls to reenergize and reorganize the statewide campaign network which worked so hard and was so successful in my 2004 Senatorial election… As we get closer to my 2010 campaign for reelection I’ll be hosting more conference calls and meetings, attending rallies and festivals, and cheering our teams on at football games around the state.”

The senator’s convinced that Louisiana voters will put the D.C. madam behind them. “They have to decide that,” he says. “But from these town hall meetings, my sense is that most of them have since it’s never come up.”

Vitter’s re-election prospects are complicated. He hasn’t held a major fund-raiser since news of the scandal broke. His event this week at a la carte was organized by his fund-raiser, Courtney Guastella, with an invitation reading, “paid for and authorized by David Vitter for Senate.” The invitation makes no solicitation for money.

There has been much speculation over potential challengers to Vitter in 2010. One telling sign of the senator’s vulnerability will be if a major contender within his own party emerges. Gov. Bobby Jindal and Secretary of State Jay Dardenne have been mentioned as possible inner-party rivals to Vitter, though neither appears to have much desire for the Senate seat. Vitter’s real challenge could likely come in the general election; 3rd District Democratic U.S. Rep. Charlie Melancon and former 7th District Democratic congressman Chris John are both said to be eyeing the race. In addition, wealthy businessman and former gubernatorial candidate John Georges, a Metairie Republican turned registered independent, also could pose a serious challenge to Vitter.

For now, Vitter can take comfort that many conservatives appear to be standing behind him. Shortly after his speech last week before the Lafayette chamber, Vitter and his aides walked briskly out of the restaurant and down the sidewalk to the parking lot. LeJeune, who hadn’t gotten to say goodbye, ran out to catch up with the senator. Pumping his arm with a heavy handshake, LeJeune placed a hand on Vitter’s shoulder and leaned in to say, “Don’t let the bastards get you down."