Take it easy. With the price of gas still through the roof, those little scooters are looking better and better. 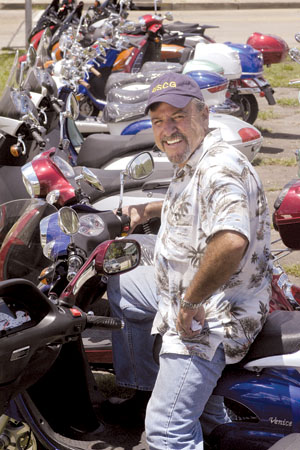 Tired of feeling like a ragged puppet, trapped between $4 per gallon gasoline, little to no improvement in the fuel efficiency of most cars in over 25 years, and the persistently televised commercials from corporations reminding you of your “carbon footprint?” And why is it that in 1984 a Honda Civic was getting 40 miles per gallon in town, and today it barely gets 25 miles to the gallon in the city? What the hell’s going on? Why is gas mileage going down?

There is one cheaper and more fuel efficient option being considered by Acadiana motorists: the scooter. Amazingly, most of these scooters weigh only a couple hundred pounds, get 75 to 90 miles per gallon, take a gallon or so of gas, and require only a quart of oil. (Think of the motorized scooters like the old Vespa and Lambretta “step-through” bikes that “Mods” raced around on in the 1979 British film Quadrophenia.) These scooters are street legal in Louisiana, but you must be at least 15 years old and have a valid driver’s license with a motorcycle endorsement and a helmet.

Huey Romero at Honda of Lafayette, which has been selling scooters for the past 15 years, says he’s seen a 30 percent increase in scooter sales within the last year. “With fuel prices where they’re at,” he says, “the demand has definitely gone up.”

Bruce’s Auto Sales on Jefferson Street has been selling cars in Lafayette since 1964 but two months ago started dealing in the retro-designed Lance Scooters that hark back to the ’60s era of European scooters. The three different models range from a 50cc to a 250cc engine, with retail prices starting at $1,300.

Owner Nolan “Scooter Bruce” Broussard recently went on a weekend trip to New Orleans with his wife, and they opted to borrow a scooter from a friend rather than rent a car. “Me and my wife went everywhere on that thing, and we had the best time,” he says. “We ate, shopped, partied — and on Sunday went to church on that scooter!”

Back in Lafayette, Broussard lined his corner lot with the brightly colored bikes. “The scooters may only go 40 miles per hour,” he says, “but they get 90 miles to the gallon. Larger engine models like the 150cc go up to 60 miles per hour and get about 75 miles per gallon.” Within two months, Broussard sold more than 30 scooters and recently restocked 23 more.