An action comedy sends up action-adventure war movies, an Oscar nominee sends up Oscar-nominated actors, and instead of having a breakdown, Tom Cruise breaks it down in Tropic Thunder. 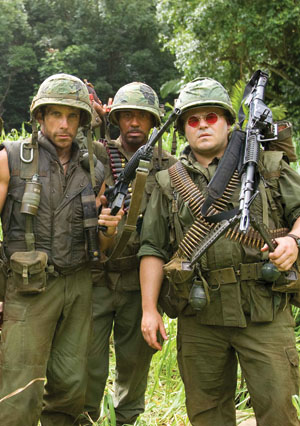 In an often-amusing film where the realities and fantasies of moviemaking leap-frog each other with near-hallucinogenic abandon, the most humorous truth of Tropic Thunder may be the way marketing can murder its own movies. Not because it’s any part of writer-director Ben Stiller’s fantastically playful screenplay, but because it’s what happened in reality to his movie-about-a-movie.

Stiller percolated the idea for Tropic Thunder for a reported decade before actually getting around to getting the film made. His incubated idea made it onto the page with an assist from writers Justin Theroux (better known for his turns in front of the camera) and Etan Cohen (Idiocracy). He gathered a good group of performers who skew toward the zany — Robert Downey Jr., Jack Black, Nick Nolte, Tom Cruise — to help him breathe life into his story about a war movie whose muddle-minded actors don’t realize that they’ve left the set behind and been sucked into an actual war. And then the machine kicked in, kicking out movie previews that — it turns out — didn’t offer a taste of the harvest to come so much as they gave away the whole farm. Or jungle.

Tugg Speedman (Stiller) is an action hero who’s outlasted his famous Scorcher series, six world-saving blockbusters finally straining incredulity and alienating his audience. His last attempt at serious acting was as the mentally challenged title character in Simple Jack, an effort that went exactly nowhere. He sees Tropic Thunder, and his role as a real-life Vietnam-era war hero, as a career jumpstart.

Kirk Lazarus (Downey Jr.), on the other hand, basks in the glow of his many Oscar and Golden Globe statues. Known for his extreme approach to method acting, Lazarus is the type who has to live the part before he can play the part. For his role in Tropic Thunder, the Aussie chameleon underwent a highly controversial pigmentation surgery that allowed him to take on the role of an African-American soldier. He sees Tropic Thunder as a way to push the envelope — the envelope he hopes will once again bear his name come awards season.

Jeff Portnoy (Jack Black) is a crass comedian known for fat suits and laugh lines punctuated by flatulence. Maybe he sees Tropic Thunder as a gateway to greater scripts. It’s hard to know, as he’s a heroin addict who continuously sneaks off to partake of the powdery inspiration he keeps hidden in candy wrappers.

The trio of name actors is joined in the jungle by rapper-turning-actor Alpa Chino (Brandon T. Jackson) and unexplained-but-necessary-nerdy-type Kevin Sandusky (Jay Baruchel). All five are lured away from the problem-plagued set by desperate director Damien Cockburn (Steve Coogan), demolitions expert Cody (Danny McBride) and deranged author Four Leaf Tayback (Nick Nolte). The plan is to plop the actors down in the middle of nowhere, shoot guerilla-style, get “real.” That train jumps the tracks almost immediately, though, but the cast isn’t clued in. The unsuspecting actors continue to act as if they are acting. The drug lords they encounter, they think, are simply unannounced rewrites.

The set-up is golden. Ego, greed, self-absorption, pretension, a little dim-bulb dumbness — all of Hollywood’s most prevalent pitfalls are on parade, ripe for the ribbing. And Stiller and Downey are up to the challenge. Stiller is a master at playing un-self-aware, and Downey simply has no fear. Perhaps it was their comedic company that emboldened embattled Tom Cruise to tackle an extended cameo as a studio head, a dancing disguise that proves he can still make — and, better yet take — a joke.

Stiller comedies are meant to be absorbed as much as they are made to be instantly appreciated. Just think about the silly snowballing of Zoolander, which just gets more brilliant with repeat viewings. His jokes don’t lose relevance with time — they gain traction. But seen in context, not in cinecidal marketing campaigns. The constant-rotation commercials for Tropic Thunder treat Stiller’s jokes as though they were one-liners. And so in the movie, they lack both the punch of the unfamiliar and the joy of wandering through fully formed, much-loved territory. The result, sadly, is that we are never allowed to get as lost in Tropic Thunder as Tugg Speedman does.