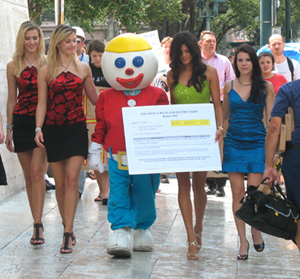 He arrived late, in a stretch limo that eased up to a stop at One Shell Square, in front of the towering office headquarters of Shell Oil. Flanked by bodyguards and supermodels, he made his way up the street, cameras flashing all around him. This was the scene of Mr. Bill’s latest protest against Shell Oil. The Saturday Night Live claymation icon may have looked like he was on his way to a V.I.P. suite at Harrah’s Casino, but the current star of MasterCard’s priceless commercials was here for the business of presenting the oil company fat cats with an oversized invoice for $361,984,000 – the cost configured by his friends at the nonprofit Gulf Restoration Network for Shell’s share of fixing the coast.

As Mr. Bill probably knows all too well, celebrity not only brings big money endorsements, but also harsh scrutiny. Backlash against Mr. Bill’s flair for traveling in style with a host of beautiful women has already reared its ugly head. Opednews.com has this report:

Grumbling was heard from the greens that it was totally inappropriate to be protesting BIG OIL and have Mr. Bill arrive in a gas-guzzling stretch limo. Someone named Lee said that one would expect the Mr. Bill of old to come parachuting out of the sky, and not take such a blatant Hollywood approach.

A drenched feminist named Cathy was incensed that Mr. Bill would lower himself and court the bimbo factor in the form of super models. “Where have the protest tactics of the sixties gone,” she wailed.

Mr. Bill sensed the discontent and refocused attention on his wetlands message. Grasping an “overdue” bill for $361,984,000 in his chubby, clubby white fingers, the Gumby-textured man attacked Shell. “This does not include their abuses from the previous decades, nor the price tag for the damage, which would not have occurred during Katrina, if our natural hurricane defense, the wetlands, had not been decimated by the oil industry,” Mr. Bill said.

“OH NO, Fix the coast you broke, Shell Oil,” Mr. Bill cried, as he sauntered down Poydras, his arms draped low around the waist of a super model.