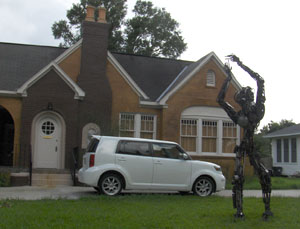 Good sculptures make good neighbors. That’s Joseph Jilbert’s attitude. The artist and Katrina nomad found his way back to Louisiana last month, nearly three years after the storm, and rented a house in New Iberia’s historic district. His first act was to erect a 3,200 pound sculpture of a female form titled “Salvage.” Recycled from scrap metal, the 10 foot tall amazon is garnering quite a bit of attention, not all of it favorable.

In fact, enough people complained to City Hall that Main Street manager Jane Braud called a special meeting of the Historic District Commission, set for Tuesday, August 26. Tribby Thornton, who owns the house where the sculpture is located at 520 East Main, and who himself lives right down the street, says neighbors called him to say the sculpture was “going to bring down property values.” Thornton is amazed at the tempest the artwork has stirred up. “People do all kinds of things and nobody says a word. Then someone displays a work of art and you’ve got a riot.”

Jilbert says he’s gotten far more positive support than negative comment. “People drive by and blow their horns. There must be 10,000 people who pass it every day. They pull over to look. It’s a hell of a show. There’s going to be a ton of people at the hearing on Tuesday.”

“Salvage” is not a permanent fixture in New Iberia. She’s already been sold to a community in Hot Springs, Arkansas, and Jilbert has a commission to produce more works of art for the Arkansas group. But for the next six months, she’ll be stirring up the sleepy Bayou Teche town, doing her duty for art’s sake. “Art is supposed to provoke a dialogue,” says Thornton. “I’m so inspired, I’m going to get Jilbert to teach me how to weld. I’ll have a studio in my house. I don’t know what I’m going to make, but I plan to be making art in the next year.” And Thornton has a nice big yard, on Main Street in the historic district, to display it.