Lafayette Regional Airport’s passenger counts are down slightly from a banner year in 2007, but can May’s all-time high numbers keep pace for another record-breaking year? 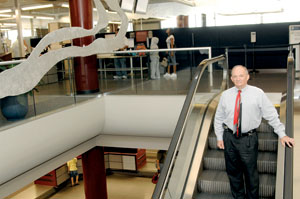 Lafayette Regional Airport’s passenger counts have been steadily climbing since activity dipped temporarily after the 9-11 terrorist attacks, and from the looks of the most recent numbers available, the local airport could very well best last year’s count of 221,682 passengers and set another record in 2008. While total passenger counts for the first five months are down slightly, by 1.4 percent, 21,100 passengers took to the air in May, the biggest month on record. In addition to passenger boardings, those arriving totaled 19,334, according to airport data.

Escalating gas prices and economic concerns may be encouraging some to fly closer to home, assesses Greg Roberts, Lafayette Regional’s director of aviation.

“I think part of it is gas prices, convenience,” says Roberts, along with what the director calls “F-A-I-R versus F-A-R-E.”

“I would like to think that people are doing a fair comparison,” he says.

Roberts maintains that people are looking at more variables today when they decide to fly, considering cost of gas to drive to Baton Rouge or New Orleans, traffic concerns and road safety issues — not to mention supporting the hometown airport.

The likelihood that activity will continue to rise means the local airport could face serious growing pains before 2011, according to commission vice chairman Jim Nunn, who also heads the commission’s strategic committee. “In three years we will reach capacity, 240,000 departures per year,” he says, emphasizing that the airport has been working on a master expansion plan for several years. Beginning in 2010, the airport hopes to begin a $30 million terminal improvement that would be completed in 2013. Funding, however, has not yet been secured. “These are the plans,” Nunn stresses. “We are searching for the funding. It takes 12 to 18 months to get the funding identified.” The project is an eastern expansion of the terminal, including the demolition of an aging hangar, addition of two or three new jet ramps and a larger parking lot, which should increase overall capacity to about 350,000 passengers a year, according to Nunn.

The consistently full parking lot, a good problem for the airport’s business but irritating for customers looking for a spot, is a sign the airport is maxing out. What’s most notable, says Nunn, is that Lafayette Regional’s increase is bucking the trend of many of the nation’s airports. It’s no secret that airports across the country are suffering from the economic downturn, coupled by the fact that fuel costs are causing ticket prices to rise. “The company that manages our parking lot tells us that almost all of their parking franchises have been seeing decreases in passenger flow, passenger parking,” Nunn says.

Convenience is certainly one draw, but stronger marketing of the Lafayette Parish area for meetings, seminars, and sporting and cultural events has also helped to attract travelers, notes Karen Primeaux, convention marketing manager for the Lafayette Convention and Visitors Commission. She also believes Lafayette is well-situated geographically. “I think it is because of our great location in the state,” Primeaux says. “We have four major airlines flying into Lafayette, and it is convenient from any part of the country.”

Also, ease and the size of the airport are inviting to travelers, Primeaux adds.

“Because it is small, it is easy to get in and out, parking is good,” Primeaux continues, “and with gas prices, people do not have to drive an hour and then park and pay for parking when you get back.”

Roberts says customers are more often factoring in the value of their time when deciding which airport to use.

Having to drive an hour or more after you come back from a trip is also discouraging to some travelers, Roberts says. “We are blessed with some outstanding airport hubs. We have service to the top airports in the world,” he adds. “We have 21 flights in and 21 out a day, Monday to Friday.”

The airport has high traffic from the oil-and-gas industry, the medical industry and the growing tech sector.

“I think most of it is industry travel,” Primeaux says. “The hotels have been running big numbers for the last couple of years. Most of that is corporate.”

Officials say industry is key to fueling the airport’s growth. “In this area we have been working on a lot of technology-based enterprises that will help generate new business to our area,” Primeaux says. “Scientists and researchers and exploration companies are coming to find out about the LITE center and the university resources.”

Roberts is optimistic about how the rest of the year will stack up, with June’s final tally due out any day now. “June is going to turn out to be a good, solid month,” he says. “Not as much as May, but I think July [was] full almost all month.”