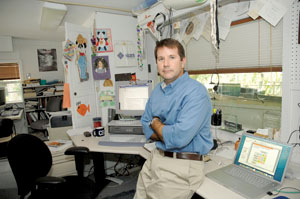 When Matt Delcambre shows up for a weekday lunch in shorts, it triggers jabs from friends.

“They say, you work from home, huh? You must not have a real job,” says Delcambre, an executive with California-based Sun Microsystems. The veteran software engineer manages a staff of 400 and oversees multi-million projects throughout North America from his home in New Iberia.

Delcambre, 46, moved to Louisiana in 2000 after working for Sun in New Orleans, and later, in Houston. After years of rough commuting and living away from extended family, he and his wife wanted to raise their four children in a simpler, slower setting. Sun’s response? No problem. Some form of telecommuting, often referred to as teleworking, is available to half of the company’s 35,000 employees, with more than 4,000 working exclusively from a home base, like Delcambre.

Almost no one at Sun has an official office — staff members simply reserve conference rooms or cubicles when they’re on site. And while Delcambre travels significantly, he still has not met many of his staff in person, including his New York-based administrative assistant.

“It’s not uncommon to hire people based on e-mail and phone interviews without actually meeting the person face-to-face,” he says.

Sun may be a trailblazer in the brave new world of virtual offices, but an increasing number of companies and small businesses in the United States regard telework not as a wasteful risk, but as a low-cost carrot that keeps employees happy and loyal. Furthermore, with companies eager to cut the cost of housing fleets of staff, the coveted perk can also improve the bottom line.

“Technology has enabled people to do more work in different kinds of locations, one of which is the home,” says Gil Gordon, president of Gil Gordon and Associates and a New Jersey-based consultant who helps companies establish telework programs. “The growing attitude of employers nationwide is ‘work from where you work best and where you can add the most value.’”

Formal telework programs at IBM, Apple, Arthur Andersen and dozens of others have helped these national corporations earn kudos and retain workers.

For example, Capital One Financial’s Virginia offices won an Alfred P. Sloan Award last year for Business Excellence in Workplace Flexibility from the Washington, D.C.-based Families and Work Institute for allowing 1,000 employees to choose where they wanted to work. Most opted for off-site, and worker satisfaction consequently increased from 57 percent to 80 percent.

And Sun, which reported that its Open Work program prevented 29,000 tons of carbon dioxide from entering the atmosphere, was recognized for its green business principles by the Environmental Defense Fund in June.

Delcambre says telework has helped Sun stay competitive among other national tech companies, all of whom are fighting for brainy employees who expect such options. It’s also helped the company expand, even as real estate costs in its Silicone Valley base have skyrocketed.

Naysayers point to the inability to visually monitor staff, but advocates say it’s a trend that works, pointing out that when companies offer such programs, staff members produce good results, often going overboard to perform. In the end, a company builds loyalty, enhances its family-friendly, environmentally-conscious brand and experiences less turnover, says Gordon. 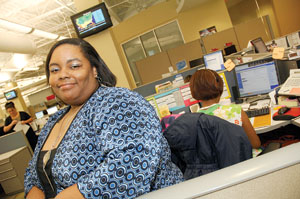 Melissa Caddie already had it figured out.

When Caddie officially begins working from home this month, the Cox Communications agent will save about $240 a month in gas by forgoing the daily commute from her Arnaudville home. The 34-year-old is the first of Cox’s Lafayette-based CyberAgents, a group that officials say will expand significantly.

“I can do a lot with that extra money,” Caddie says.

Cox’s employees were growing at a rate faster than their physical space, says Baton Rouge Customer Service Manager Lea Plummer, who created the program. Plummer knew other companies, including three sites within Cox nationwide, offered similar incentives. Her staff worked behind computers and over phones, never coming into contact with customers face-to-face.

Plummer speculated many employees would jump at the chance to lose the commute. She also figured they’d work hard to maintain it.

To become a CyberAgent, a South Louisiana Cox employee has to have worked one year for the company; must have demonstrated good attendance, good product and technical knowledge; and must be self-motivated. Plummer says the program comes at no additional technology cost to Cox — employees use their own computers.

Calls are still recorded and monitored so that supervisors can measure how long it takes a CyberAgent to answer a call, how they’ve responded to customers and whether background noise is present, she adds.

“Probably like a lot of companies, space is an issue for us,” she says, “So is work-life balance; it’s a win-win.”
Drive time becomes work time

The concept of telework is not new, says consultant Gordon, but its rising popularity is tied to the growing drudgery of commuting. In fact, long commutes have become such an issue for workers that even while companies are cutting health care benefits and pension packages, they’re expanding their tolerance for when staff members come and go.

Today, 79 percent of employers allow at least some employees to periodically change their arrival and departure time, up from 68 percent in 1998, according to Families and Work Institute’s 2008 National Study of Employers.

The commute can be particularly hard on the parents of young children, bound by the operating hours of child care facilities.

“I would be racing, palms sweating to get there on time to pick them up,” recalls Stacy Hutchinson, senior communications advisor for Shell’s Exploration and Production in the Americas, and a married mother of two. 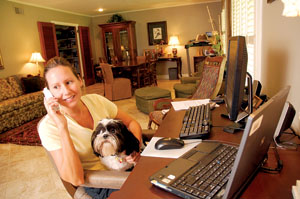 Hutchinson started her career with Shell in Houston, where she commuted at least an hour each way from her home in Missouri City, Texas, to an office in downtown Houston.

Like Delcambre, she returned to Lafayette to be closer to family. But unlike Sun, which considered Delcambre’s telework commonplace, Shell did not have a formal work-from-home program.

Hutchinson tendered her resignation, giving three months notice. But her boss didn’t find an adequate replacement, so he asked Hutchinson to stay on and work from her new home in Lafayette on a temporary, part-time basis.

It worked well, and within a year, Hutchinson moved back into full-time work, still stationed at home with some travel.

“It was very different at first, not seeing anyone face-to-face,” she says. “I was so concerned that people would think I was goofing off, [so] I went overboard answering e-mails immediately. Finally, my boss told me he didn’t expect me to be there 24/7.”

Such compulsion is common to other telecommuters.

“The problem is that you always want to work,” says Delcambre. “Most of the commute time becomes more work time.”

The virtual, decentralized office will always make some employers uncomfortable, says Gordon, because they want to see their workers in order to be assured they’re actually producing. “That kind of management philosophy is very risky, because the same belief set is going to negatively affect other aspects of work,” he adds.

Indeed the nervous, micro-managing supervisor has long been a caricature of the American office, a personality-type that won’t be able to compete against an increasing supply of tech-savvy telework options.

But there are potentially thorny issues for employers, including accepting more risk concerning employee health and safety.

In some cases, says Greg Guidry, managing partner at Onebane Law Firm and an expert in labor law, an employer could be called upon to ensure a home-based operation meets federal requirements specified by the Occupational Safety and Health Administration. Further, since workers compensation coverage also applies to the home-based workplace, employers may want to be aware of home office conditions.

“Much of this is being worked out on both the federal and state level,” he says. “There’s still a lot of gray area.”

“Working from home will not appeal to everyone,” says Cox’s Plummer, who deliberately crafted the program to be both incentive-based and optional. “Some people are going to want to come into an office and be around other people.”

That lack of social interaction is what bugs salesman Kevin Craig, a 40-year-old Marine Corps veteran who has sold Snap-on-Tools for the last 17 years from his Bendel Gardens residence. The international company has a sales force of about 400, all of whom work from home.

Half of Craig’s time is spent on the road calling on customers, which include municipalities and government offices in the western half of the state.

Craig has had a successful career at Snap-on-Tools — his territory expanding three times since he started — but one thing has always bothered him about the set up: no co-workers.

“For years, it has driven me crazy,” he says. “I hear people complain about the people they work with, but it gets old being by yourself.”

Isolation and a lack of esprit de corps are factors on Cox’s radar. The company will require CyberAgents to return for team building sessions and meetings.

And at Sun, says Delcambre, there’s a move afoot to actually re-create a water cooler culture that invites idea sharing and relaxing. Without a traditional office model, Sun officials have noticed their decentralized army of teleworkers simply need more time during the work day to bump into each other.

“That’s one of the things we want to solve,” says Delcambre. “The biggest issue is that in most cases they work too many hours.”

Consequently, Sun has developed so-called “geek space,” a new kind of employee lounge that provides chances for staff to relax and bat around ideas.

But notwithstanding isolation, potential fear of exposure and managerial reluctance, telework appears set to expand, says Gordon, particularly as varieties of factors converge. Companies will continue to cut costs. The pressure to go green and save resources will increase on corporations, the public sector and individuals. Knowledge-based industries will grow, and more tech-savvy young people will enter the workforce. Labor attorney Guidry adds that telework’s foothold will be enhanced by a tight labor market.

A perk everyone can agree on?

The employee perk formerly known as flex time, or “four-tens,” is getting a lift as companies feel the pinch of rising energy costs. Chrysler is considering moving workers in its Toledo, Ohio-based jeep plant to four 10-hour days rather than five eight-hour days as a means to offset falling profits.

The domestic automaker is not alone. According to the Washington, D.C.-based Families and Work Institute’s 2008 National Study of Employers, 38 percent of companies in the United States offer at least some employees the ability to work longer hours on fewer days. Eight percent offer the same choice to all staff members.

As the national economy sputters, the public sector is feeling the pinch, and many government entities are considering sweeping changes.

In July, Utah became the first state to move most workers to a four-day work week. Emergency services were excluded. The savings from turning off utilities in 1,000 of 3,000 state buildings is predicted to be around $3 million annually. In August, the state of Hawaii announced a similar, pilot program for its human resource division.

At least 14 school districts nationwide are also switching to four-day weeks, according to the American Association of School Administrators. Students will attend school for longer hours and have either Fridays or Mondays off, a measure systems believe will help them cut back on food, utilities and school bus diesel.