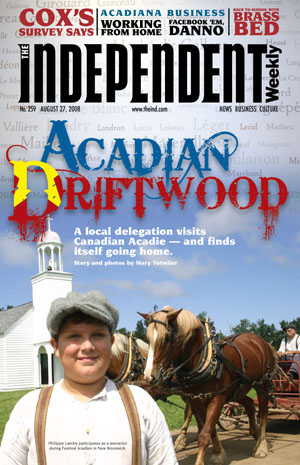 Philippe Landry participates as a reenactor during Festival Acadien in New Brunswick.

It’s not yet 6 o’clock, but one sound sets off another.

A woman beats on a frying pan with a wooden spoon.

She’s answered by a man who blows on a red, white and blue horn —

The bells of E’glise St. Pierre aux Liens begin chiming, and the street erupts in a deafening cacophony of noise.

The Tintamarre has begun.

Tintamarre — “big noise” — is more than a cultural event; it’s a political statement. Descendents of the Acadians still remain in eastern Canada 250 years after the Grand Dérangement of 1755. Some of the French families who had settled in Nova Scotia in the 17th century, aided by the Micmac Indians, fled expulsion by the British. They traveled to the far north, to an isolated peninsula that juts out into the Gulf of St. Lawrence in the province of New Brunswick. There, the families — the LeBlancs, the Landrys, the Poiriers, the Maillets — regrouped in small villages and began again, building a life free to practice their religion and speak their native tongue.

They lived their lives in French, making little noise, until 1955. That year marked the 200th anniversary of the deportation. On Aug. 15, the day of the Assumption of the Virgin Mary, the patron saint of the Acadians, residents went out into the streets of Canadian Acadia. At precisely 5:55 p.m. (17:55 in Canadian time), they began banging on pots and pans or anything they could find. The big noise, Donatien Gaudet, an 86-year-old Acadian activist explains, “was to tell the world that we are still living.” Dubbed the Tintamarre, last year the celebration drew 25,000 visitors to Caraquet, the capital of Acadie du Nord.

This year, a handful of Cajuns happily joined in the commotion. Members of the delegation included KBON’s Swamp ’n’ Roll host Todd Ortego and his wife Debra; 008 magazine editors Joan Broussard and Kenny Steinocher; Fox-44 TV reporter David D’Aquin and cameraman Brandon Shackelford; KATC TV-3 anchor Hoyt Harris and his wife, Bette; Centre International  Congrès Mondial Acadien coordinator Rachel Dugas; and Daily Advertiser columnist Jan Risher. We traveled to New Brunswick to get a first hand immersion into the National Day of the Acadians and a preview of what will be happening next year, when New Brunswick hosts the 2009 Congrès Mondial Acadien.

The build up to the Tintamarre starts Aug. 1, the beginning of the two-week-long Festival Acadien. The red, white and blue flags with a big yellow star, the banner of the Acadians, are raised on every flag pole, flap from every house, and fly from the antennas of trucks and cars. Decorations sprout in front yards, and even some of the facades of the neat cottages on the peninsula get a tri-color coat of paint. 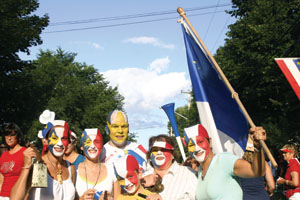 We are staying at the 1891 Hotel Paulin, where the Acadian flag flies from the third-story dormer. Third generation owner Gerard Paulin and his partner Karen Mersereau are melding the historic accommodations with dazzling nouveau cooking based on local ingredients. Eating at the Hotel Paulin is an education in the riches of the sea and the farm — the traditional occupations of the Acadian residents. Summertime is lobster and crab season, and Mersereau takes advantage of the bounty. Shellfish turn up in stews based on boullibaisse, in creamy linguini, sauteed in a rum butter sauce, as crab cakes and tucked into flaky tarts. Local lamb, traditional chicken and dumplings, artisan cheeses and lettuces from the hotel’s gardens are showcased on the menu. Dessert is another course in all things Acadian, from the traditional sugar pie to a Cajun pleasing blueberry bread pudding with rum sauce. Mersereau and Paulin bent over backwards to help us, be it with Internet connections or home remedies for insect bites. And the hotel, located in the heart of Caraquet, made a great base for exploring the Acadian Peninsula.

As a counterpoint to Mersereau’s upscale cooking, most of the restaurants on the peninsula serve simpler, but not lesser, fare. It took us a while to relinquish the Tony Chachere seasoning, but slowly our palates adjusted to food with less fire. “Not too much salt,” was a local mantra, “you should be able to taste the seafood.” Lobster appears everywhere: in breakfast omelets, tossed with a bit of mayonnaise and rolled into a hotdog bun for lunch, as a lobster burger at McDonald’s, or steamed whole for dinner. Scallops, mussels and clams, sauteed, steamed or fried, are local favorites. One of the best discoveries is that summer is oyster season in New Brunswick. The shallow bays are fertile grounds for farming oysters in baskets suspended in the top third of the water column. The oysters grow quickly and are easier to harvest than our bottom dwellers in Louisiana. We tasted an oyster named for the hero of the Acadian resistance, Beausoleil Broussard, who fought on in Nova Scotia for several years before following his kin to Louisiana. The small BeauSoleil oysters, harvested in bays outside of Shippagan, Nequac and Bouctouche, taste like a sweet briny mouthful of the sea.

Nights are filled with music. When the band Grand Dérangement from Nova Scotia hit the stage, it became vividly clear how Acadian traditional music birthed the Cajun sound. The violin played lead, closely followed by the beat on a wooden box or the tapping of dancers performing a high-energy jig. Sung in French, some of the repertoire told the story of the Acadian diaspora and the close ties between the French settlers and their Micmac neighbors. At the Village Historique Acadien, where 40 historic structures are gathered to show the architecture and folkways of the people, Donat Haché, an 85-year-old fiddler, scratched out an air that, with my eyes closed, could have been played on the stage at Festivals Acadiens. He looks like he may be a close cousin to the late Creole fiddler Canray Fontenot.

Everywhere we turned we found similarities. Small towns dominated by large Catholic churches. Houses with a boat pulled up in every yard. Warm welcomes from people who didn’t know us. And a bawdy sense of humor that matched our own. A favorite morning roll, a round pinwheel of pastry sweetened with cinnamon, sugar and butter, is affectionately called “pet de soeur” or nun’s (teacher’s) pet. The joke is a pun. Pet is slang for gastric wind. So the round little treat with the hole in the middle given to the Goody Two-Shoes of the class became a little more difficult to swallow when the smug child realized she was eating a nun’s fart.

But there are differences as well. Canada’s British governors, and later on, the Canadian parliament in Ottawa, moved to make English the official language of Canada. The province of Quebec, militantly French, has a strong separatist movement and has attempted to break away from the Canadian federation. At fiery conventions in the 19th century, while the Quebecois organized to become a sovereign state, the Acadians refused to participate. The two French cultures are different, and the Acadians did not want a political fight, nor did they want to separate from Canada.

What they did want was the right to live their lives in peace and speak the language of their heritage. The Acadians convened as a people for the first time in 1881. They chose the day of the Assumption of the Virgin, Aug. 15, as an Acadian holiday, and put her golden star on their flag. Père Lefebvre established a college in the community of Memramcook in 1864 so that the Acadians could pursue higher education, not only in French, but in their own dialect. The power of education paid off. While the struggle took a century, in the 1960s, Louis Joseph Robichaud was elected the first Acadian premier of New Brunswick. He created a program called Chances Égales pour Tous (equal opportunity for everyone) to support the rights of the Acadians to live in their language and culture. Taxes, passed to support dual school and medical systems, allowed the residents of New Brunswick to choose which language they wanted to speak, and by law, New Brunswick became bilingual. Every public sign is printed in both languages. 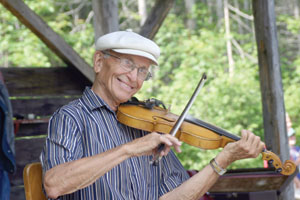 The story of the Cajuns is a familiar one in Louisiana. After arriving in Louisiana following the Grand Dérangement, the Acadian immigrants were left to themselves for more than a century. Then, in 1921, legislation forbade the Cajuns to speak French in school. An entire generation was forced to mute its voice, and the Cajuns did not teach their children the language of their forbearers. Not until the Cajun Renaissance began 40 years ago, when the Council for the Development of French in Louisiana and Festivals Acadiens were born, did the Cajuns begin to publicly celebrate their heritage with pride. Musician Zachary Richard, who was in Tracadie for a concert, says the French language in Louisiana is a luxury. “In New Brunswick,” he adds, “it is a right.”

Back in Louisiana, we are struggling to maintain the Cajun language. There are more than a million people of Cajun descent, the largest concentration of Acadians in the world, in southwest Louisiana. There are French immersion schools in Lafayette, but French is still not the lingua franca of the streets. Meanwhile 55,000 of our cousins reside on the Acadian Peninsula, living their lives in French. The Tintamarre brought us back together.

Bright sunny skies lit the streets of Caraquet, where people dressed in Acadian costumes or painted themselves red, white, blue and gold. “I’m proud to be an Acadian on a day like today,” says Giselle Savoie, who wears a red and blue clown suit. “Our grandparents left us a heritage. We cannot forget. We can do everything that our mothers taught us. Making a garden. Sewing a quilt. And we like to have fun.”

Also among the Lafayette travelers were Acadiana Open Channel’s Lucius Fontenot, KRVS Francomix host Valerie Broussard and KLFY TV-10 Passe Partout host Bobby Moore (along with cameraman Tony Living), who represented the Cajuns by pinning the Acadian flag to their shoulders as capes. Curious locals stopped them. When the trio explained they were flying the flag of Cajun Louisiana, they were embraced.

“Mon cousin,” the Acadians told Moore, who grew up speaking French with his Baudoin, Broussard and LeBlanc grandparents.

“It brought tears to my eyes” says Fontenot.

“We were walking up and down the street,” adds Broussard, “with big smiles like 3-year-olds. Everyone was so proud to be Acadians. People were glad to see us, glad we spoke French.”

“Being there,” says Fontenot, “it’s an inspiration to speak French at home. My mother was proud to be Cajun. I want to continue the tradition.”

Next year the grand convention of the Acadian people will be held in New Brunswick. The Congrès Mondial Acadien is a gathering of the scattered families of Acadie. Held every five years, first in Nova Scotia in 1994, in Louisiana in 1999 and Nova Scotia in 2004, the descendents of the families of Grand Pré, Nova Scotia, will gather for a huge reunion during 17 days in August (Aug. 6 to Aug. 23, 2009). The Acadian Peninsula is a small place, and hotels will be booked solid soon; however, residents are offering rooms in their houses to visitors.

Jacques Lanteigne, director of the CMA, says staying with local people might be the best way to experience Acadia. “When you stay with someone local, he will introduce you to the neighbors. It is likely they will have a barbecue. If you are lucky, they will have a boat and take you out on the water.”

Lanteigne says his mother, a French teacher, visited Cajun country not too long ago. “She was proud to tears to see the language still alive in Louisiana,” he says.

For more information, visit the CMA Web site at www.cma2009.ca or www.tourismnewbrunswick.ca.