Hoping to maintain its customer base, Cox Communications continues to upgrade service and poll residents for insight as it prepares for stiff competition from LUS. 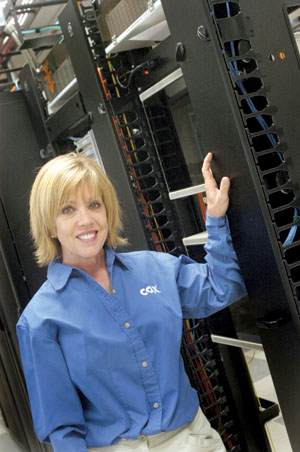 Imagine you are president of Cox Communications. What would you do or ask your employees to do to ensure local customers continue to purchase their telecommunications services from Cox? That’s one of the questions in an extensive new telephone survey for Lafayette residents. It appears to be the latest of Cox Communications’ ongoing preparations for January, 2009, when Lafayette Utilities System enters the market as its chief competitor. Through a high-speed, fiber-to-the-home network, LUS has pledged Lafayette residents better phone, cable and Internet service at lower rates. While Cox Communications, along with BellSouth, initially signed on to legal challenges aimed at thwarting LUS’ telecommunications initiative, Cox now seems focused on all-out competition.

Kleinpeter says the company is consistently laying additional fiber to improve its network (fiber that generally runs to neighborhood nodes, while LUS plans to go directly to each home), and this year Cox introduced a number of upgrades to its service. For example, a new power boost feature for Cox’s Internet service increases download speeds for large files. Cox contends that premier high-speed Internet subscribers can reach speeds up to 20 megabytes per second with power boost.

Cox has also upped its number of high-definition channels to 33, with plans to reach 50 or 60 by the end of 2008. The company now has free area-wide calling for its phone service, meaning there are no long distance charges for any calls within a caller’s area code. Next year, Cox will begin testing a new wireless service in some markets, with a goal of having wireless offerings in two markets by late 2009. Kleinpeter does not know whether any Louisiana city will be included in the initial rollout.

Locally, Cox has launched a new Web site, innovatelafayette.com, in order to help better tell its story. “When we merged the Baton Rouge and Lafayette systems,” Kleinpeter says, “we found out that there was a lot of misperception about what we could and couldn’t offer. Many people thought that we didn’t even have fiber, period, which was just amazing. So we realized that there was a lack of communication. And certainly, as our market becomes more and more competitive, we wanted a place to highlight what we have and can do.”

Kleinpeter adds that once LUS’ services are up and running, Cox’s Web site will also serve “as sort of [public] watch for the spending and delivery on promises of the LUS plan.”

If a new phone survey quizzing Lafayette residents about Cox and LUS is any indication, Cox also is exploring several new pricing packages and contracts with its customers. Kleinpeter says she has no knowledge of the survey. She says Cox’s marketing department handles all research, which is generally not made public for competitive reasons. Kleinpeter would only say she was informed by marketing that there is a current survey out. She also acknowledged that questions from the survey sound like questions that could likely come from Cox. (LUS says the public utility is not responsible for the survey).

“We’re a market driven organization,” Kleinpeter says, “and we do surveys as part of our business as usual.” She says the company conducts quarterly surveys.

The recent survey, which takes approximately 30 minutes to complete, specifically deals with the pending competition from LUS. Calls have been going out over the past two weeks.

The survey begins by asking customers what telecommunications services they currently receive, how satisfied they are, then asks detailed questions about different issues that might cause them to switch service providers. The survey also gauges the appeal of several new promotional packages. It asks how interested customers would be in a family-friendly cable package that would offer 40 channels, including sports, news and children’s programming for $36 a month. It asks customers’ interest in getting exclusive content from their service provider, like a kid-friendly Disney Web site or a Web site devoted to a local sports team.

The survey also asks a number of questions about customers’ willingness to sign 12-month contracts with Cox, with a certain benefit, as well as a cancellation fee. It quizzes customer interest in each of the following promotions, paired respectively with a 12-month contract: a rewards program that allows you to earn points each month based on your monthly bill to redeem for prizes, a 10 percent reduction of your cable bill, an additional DVR receiver, one free on-demand movie a month, a hotline number to call for priority service.

LUS Director Terry Huval says he is not surprised to see Cox exploring ways to lock down customers into long-term contracts to prevent them from switching providers. He says this tactic was frequently used by incumbent providers in other areas he visited that have launched municipal telecom services. He fully expects Cox to roll out a slew of enticing promotional offers in the coming months.

“We’re not going to require a contract,” Huval adds. “We’re not going to bind anybody. Somebody takes our service one day and decides to swap then that’s what they’ll do. We’re trusting that the people of Lafayette are going to see the benefit of what we bring to the table, which is going to be more than a pricing benefit. It’s also going to be the capability and the clarity.”

LUS has said that its fiber-to-the-home network will be of higher quality than anything Cox will be able to offer, though it has been trying to keep some details of the plan under wraps. Huval says like Cox, LUS’ Internet service will have three tiers with the minimum offering 10 megabits per second upload and download speed. (Cox’s base tier offers download speed of 9 Mbps, with an upload of 768 kilobytes per second.) Huval notes that LUS’ next two tiers will offer speeds greater than 20 megabits per second. The public utility also hopes local customers will enjoy a peer-to-peer connection (two local LUS subscribers communicating with each other) of 100 megabits per second, making possible advanced applications like teleconferencing.

Huval says LUS’ fiber project is progressing smoothly, with the public utility in the process of hiring 55 new employees. LUS recently completed work at its head-end facility, where a dozen satellites are set up to begin receiving cable channel signals; it’s still negotiating deals with programmers, expecting program offerings to be similar to Cox.

“On day one our goal is to have an excellently operating telecommunications system,” Huval says. “It won’t have all of the bells and whistles on day one. That it’ll have as time goes on. But on the first day we want to have something that’s competitive and appealing to customers. As time goes on we’re going to continue adding more features.”

As for pricing, LUS is still shooting to offer its triple-play package of phone, cable and Internet service for 20 percent less than Cox’s standard rate, which remains about $105 a month. This puts LUS’ price at around $85 a month. While Huval suspects Cox may be able to beat that price with some of its promotional plans, LUS is counting on many Lafayette customers looking at more than price. “I think there are going to be some people who are looking at price and price only,” Huval says, “who are going to fall for [promotional offers]. I think most customers, most people in Lafayette, realize the only reason why Cox is offering any of this now is because there’s a competitor in town. And we’ve gotten a lot of support, both at the polls and otherwise in the community for our project.”