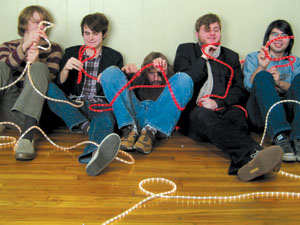 For Brass Bed, it’s been a year of rarities. It’s next to unheard of for a Lafayette rock band to play Festival International; Frigg A-Go-Go pulled it off late in their decade-long run. Along with theTransmission, Brass Bed made the Lafayette indie rock debut at New Orleans’ 2007 Voodoo Fest. And with the local indie scene in a slump, Brass Bed is an anomaly — adding to their following and getting glowing reviews in outside publications such as Flagpole and Creative Loafing.

It hasn’t made them instant stars, but it looks good on paper. Member Christiaan Mader jokes of their Voodoo Fest gig, “It reminds me of that Simpsons episode where Lisa’s helping Marge write out her résumé, and she’s like, ‘You worked for the Carter administration. Well, you voted for him twice.’ Our name is on the T-shirt. As far as anyone else is concerned we opened for Wilco.”

The slot before Wilco would have worked, as the quintet weaves the band’s influences into their self-described alt.country, indie noise pop. Their 2008 Midnight Matinee is a record of strong influences. The heady, playfulness of Flaming Lips is combined with the big-as-a-circus sound of Sgt. Pepper (the infectious “Olivia” could pass as a B-side on Clouds Taste Metallic). Even with those influences, Brass Bed’s punchy and poetic writing style keeps them grounded, and equal parts of Lafayette’s indefinable indie scene helps the record keep its own feel.

“When people say we sound poppy, we don’t take that as an insult,” says Mader. As well as his love for the Beatles, Mader shares vocals and songwriting duties with band mates Jonny Campos, Peter DeHart, Andrew Toups and Jacques Doucet.

Brass Bed looks to capitalize on its momentum with regional touring and hopes of landing a strong publicist. Forget a record deal. The band just wants to make its way.

“We figured we had a couple years where we’d have to hit the road in complete obscurity before we actually saw anything,” says Campos.

Adds Mader, “All of our goals have been, as far as making it, we want to just be able do this and only this.”

Brass Bed performs at the Blue Moon Saloon with Feufollet for a back-to-school party on Saturday, Aug. 30. The show starts at 8 p.m. For more info on Brass Bed, visit www.myspace.com/brassbed. For more information on the show, visit www.bluemoonpresents.com.