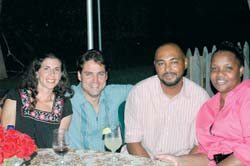 Danielle and Adrian Baudoin and Ronald and Terri Decuir 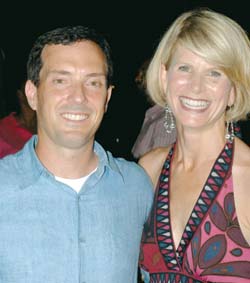 Ashley Lecky’s surprise 40th birthday was announced by handmade invitation, a black miniature photo album studded with ruby rhinestones crafted by Gwen Aucoin. Set in the beautiful formal gardens of Ashley and her husband Rob’s North Sterling home, a winding path of copper torches guided guests from the front gate to the rear gardens where red satin lanterns in the trees lit the way to the reflecting pool. Guests were surrounded by tables draped dramatically in black and gold brocade to underscore the Argentinean theme. Event designer Beyond Flowers had red rose arrangements that graced each table. Iron candleholders cast a soft glow on a buffet of seafood paella and suckling pig prepared by Pamplona Tapas Bar and Restaurant. Cocktails were served as guests enjoyed romantic salsa and tango tunes. A two-tiered birthday cake of chocolate and red velvet was created by Daisy Cakes of Rayne and sat at the center of the party on a rustic cypress table. Dancing under the tapestry-draped tent continued until the stars dimmed and the moon went to bed.

Who would have thought that a political fund-raiser could be so fun? At the home of Will Mills on Thursday, Aug. 14, the Lafayette Bayou Boys welcomed a very special guest. The newest Bayou Boy is actually a Bayou Gal. Inductee Laura Bush was recently in Lafayette, and she stopped off to jam at the private reception, Cajun style. (At this Republican Party event, Party Girl took a back seat and the first lady stole the show.) 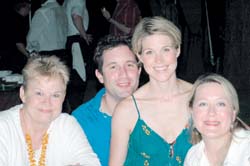 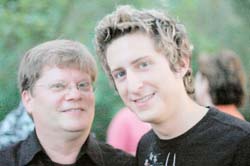 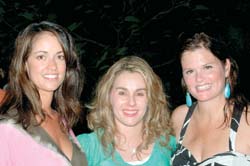 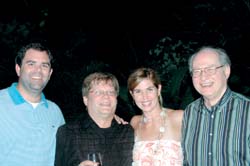 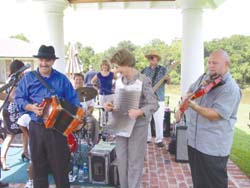 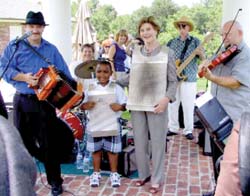