African-Americans are four times more likely than whites to die from diabetes, but a new grant program aims to turn that tide. 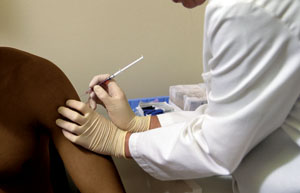 Sandra Pierce had a significant family history of diabetes — her mother, sister and aunt all had the disease. She made a point of periodically testing her blood sugar levels, and on repeated exams, her levels were OK. She thought she had dodged a bullet.

But her health started to take a turn for the worse when she reached her mid-40s. While walking, her legs would “lock,” making it difficult for her to move with ease. As these incidents increased, she became concerned and eventually saw a doctor, whose diagnosis was neuropathy in both legs, a secondary symptom of diabetes. Even after testing, her physicians were not convinced that she had diabetes, a chronic disease associated with abnormally high levels of sugar and the body’s inability to produce insulin or use insulin to its full potential.

In 1994, the New Orleanian got the call from her clinic telling her the dreaded news — her blood sugar level was at 400 milligrams of glucose per deciliter, dangerously above the acceptable limit of 100. The results were official: Then 45-year-old Pierce had adult-onset type 2 diabetes. She started with medications in pill form but continued to have leg problems and eventually wound up in a wheelchair. She says doctors then put her on “massive” doses of insulin.

Despite the insulin, Pierce’s problems became so bad that her husband had to help her turn over in bed. After Hurricane Katrina, the couple relocated to Lafayette, where Pierce sought treatment at University Medical Center for newly-developed hand problems. She also had two surgeries for hidradenitis suppurativa, a disease affecting the sweat glands.

Pierce’s treating physician, Dr. Karen Bates, referred her to a disease management program for diabetes at UMC. Nurses specializing in diabetes assigned Pierce to classes, which taught her about diabetes and how to manage it through healthy eating and exercise. After taking a series of classes, she participated in a rigorous weekly program that involved weight monitoring, exercising, meal planning and tracking. “It was helping me to get a better grip in my diabetes, and my other body changes that were happening,” she says.

Since moving to Lafayette, Pierce has started doing water aerobics at the city-parish owned Robicheaux Center and exercising at Curves. She now moves around well. “I’m almost in the Olympics now,” she jokes. She has lost 50 pounds, her blood sugar level is close to normal, and she is taking only 50 units of insulin — half what she had been taking. “I was almost 300 pounds and in the wheelchair and sick as a dog,” she says. “And, thank Jehovah, I’m here now, feeling fit as a fiddle, and I’m doing really, really well. My diabetes has gotten so much better over these couple of years of my coming here.”

Diabetes is a severe problem for African-Americans like Pierce in Louisiana. While doctors have diagnosed 19.7 percent of whites with the disease, an astounding 41.5 percent of blacks are afflicted. The mortality rates are even more dismal — African Americans are four times more likely to die than Caucasian diabetics in the state.

It is crucial that people with diabetes learn to manage this life-threatening condition, and a new grant from the Centers for Medicare and Medicaid Services offers hope to African-Americans with this disease. The three-year pilot program affects patients in Lafayette, St. Landry, East Baton Rouge, Orleans and Iberville parishes. At 24-30 percent, St. Landry Parish has the highest ratio of diabetics ages 65 and older. Evangeline Parish ranks second at 22-24 percent.

Dr. Ron Ritchey of Lafayette, a retired internist who does consulting work as an associate medical director for the Louisiana Health Care Review, applied for this CMS grant, which is designed to improve the health of elderly African-Americans with diabetes. LHCR is the quality improvement organization for the state of Louisiana.

LHCR, under the guidance of Ritchey, Dr. Samuel Leonard of the Mandeville area and Dr. Shaun McIntire of Shreveport, will first identify minority providers who have a fairly large diabetic population. Then LHCR will work with those physicians to provide additional resources for their patients, teaching them more about their disease and helping them understand their medications and become more prominent in self-management of the disease process.

LHCR will be leading two quality improvement efforts for CMS. “At LHCR, we are asked to survey the Medicare population of Louisiana to determine what disparities exist and what the connections might be between disparities in health care and health care outcomes in specific minorities,” Ritchey explains. “We know that diabetes has a very high prevalence in African-Americans. It also tends to have the greatest severity in African-Americans. The complication rates are higher, and we are trying to develop new ways of approaching that to reduce those complications.”

The other effort is the pilot project, which will recruit 40 physician practices to work closely with about 2,500 patients to manage their diabetes. LHCR will identify known specific markers of care in diabetes, measuring blood sugar levels, and assessing damage to the eyes, kidneys and other organs.

“Over a period of time, we will work specifically with patients to educate them about their disease,” Ritchey says. “We’ll work on a community-based approach to help them have better control of their diabetes. So, basically, you can think of it as an extension of the efforts of the primary physician.”

Results from the five-parish pilot will then be analyzed, and if the project is successful, it will be expanded to include the entire state.

Research has proven that controlling blood sugar significantly impacts the effects of diabetes, including damage to major organs fed by the circulatory system and hardening of the arteries. “We understand much better how important it is to control the blood sugar,” Ritchey says. “But, doing that is a different story. It’s not simply a matter of just putting patients on a lot of medication, then walking away from them. Management of diabetes is much more complex than that. It takes a lot of diet and exercise, as well as the correct medications. So, we are beginning to realize that the patient has to have a good understanding of the disease, and they just have to have an investment and involvement in the management of the disease. And, that’s a whole new and complex area, and one of the things that LHCR is going to be working on with the partnership with the patient’s physician,” he continues.

“The sooner you know what is going on, the sooner you can treat it,” says Pierce, who is now 59. “Like the old saying, ‘forewarned is forearmed.’ You are armed for what is coming. Because, diabetes can be a killer. And if you know how to handle it, then it’s really not a problem.”