By staying off-script and tilting at windmills, Louisiana’s own Jimmy Breaux has come out of nowhere to captivate voters nationwide. 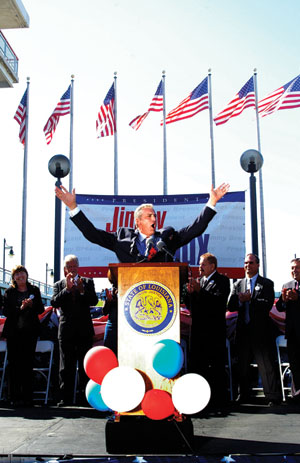 It used to be that if you wanted to run your fingers through the soil of Louisiana’s political birthplace, you’d head up to the pea patches of Winnfield. The sleepy town in north-central Louisiana, which boasts roughly 5,700 residents, gave us gubernatorial lackey Oscar K. Allen, his mentor Huey P. Long, Uncle Earl and a half-dozen other Longs who have occupied important posts in the state Legislature, Congress and Armed Forces. Some folks jest there’s something in the water up there, but it’s obviously been more about consolidating power through lineage.

These days, the jugular of modern Louisiana politics can be found in Crowley. But in comparison to its northern counterpart, it’s more of a Cajun Camelot, settled snuggly between the winding bayous of Acadiana. In more recent years, this south Louisiana haven, host of the International Rice Festival, has gifted us with four-term governor (and jailed felon) Edwin Edwards and his protégé John Breaux, a high-powered lobbyist who was formerly a high-powered U.S. senator. Chris John, a former congressman who is now shilling for the oil and gas industry, is also a Crowley native.

The Acadia Parish seat, however, isn’t finished unloading its political gifts on Louisiana — and the nation. Jimmy Breaux (no relation to John) has seemingly come out of nowhere to capture the hopes and dreams of America’s voters. If Crowley has a favorite son at this given moment in history, it is indeed Jimmy Breaux. He’s touting a poll that has his campaign 20 points ahead in the race for president. It’s a grassroots effort — an impressive one — that is flying below the Obama-and-McCain radar, due chiefly to his reluctance to play the same game as the Republican and Democratic frontrunners. “They’re a bunch of a**-kissers,” Breaux says. “The media loves that.”

Maybe that’s why the “Jimmy Breaux for President” campaign committee has taken its message the viral route, using marketing techniques that rely on pre-existing social networks, like MySpace and YouTube, to increase brand awareness. Or maybe it’s because Jimmy Breaux doesn’t actually exist, at least not in the political realm we’re used to seeing in real life. Breaux is the center of attention in Dirty Politics, a dark comedy about a fatally-flawed Louisiana senator running for president.

Thousands of people have already viewed the Web videos of Jimmy Breaux, portrayed by John Valdetero weighing in on everything from race (“A Bro in the White House!”) to global warming (“We’re going to make a pre-emptive strike on Antarctica, just blow it apart.”) His wife, Rita Breaux, played impeccably with scene-stealing performances by Melissa Peterman, appears in a few of the Web videos, drinking longnecks and wreaking havoc. In the film, recently shot and screened in Baton Rouge, her boisterous female lead is referred to as “Hurricane Rita” by staffers.

With Dirty Politics, writer/director/producer Steven Esteb has finally found a way to put his “worthless” political science degree to good use. Esteb, a resident of Erath, also created characters that are familiar to anyone who has walked close enough to Louisiana’s political flame to get burned — there’s the corruptible candidate, who can rationalize just about anything; his conniving wife, who truly runs the show behind closed doors; the campaign manager who can fix anything; the longtime aide who hero-worships the candidate; and even the lowly intern looking for a break.

With all of the recent prostitute and airport bathroom scandals that have rocked Congress as of late, the plot isn’t completely unfathomable. In fact, the plot is partly inspired by a trademark quote by the flamboyant Edwin Edwards. When joking with reporters in 1983 about his race against Republican Dave Treen, Edwards quipped, “The only way I can lose this election is if I’m caught in bed with either a dead girl or a live boy.” Well, in the case of Dirty Politics, it’s the former.

Jimmy Breaux finds himself stuck with a corpse after a woman he picks up at a campaign rally suddenly dies — during sex. His campaign manager and top aide, played by Jerry Katz and Judd Nelson, respectively, struggle between “doing the right thing” or dumping the body to preserve the candidate’s 20-point lead in the polls. There are appearances by Beau Bridges, James Carville (the real Ragin’ Cajun) and Howard Hesseman, who plays a political bag man known as “Big Oil.”

The real star, though, is Louisiana politics. All of the perceived faults, backroom dealing and unethical behavior that fill our history books are on display. There are even references to, and a scene involving, the secret underground passageway from the State Capitol to the Heidelberg Hotel that Huey P. Long allegedly used to shuffle his mistress around. The lead character, Breaux is likewise an amalgam of Crowley’s most notable politicians, from Edwards to the other Breaux (John). It’s a must-see for Louisiana political junkies, but don’t go looking for tickets yet. Esteb is presently looking for a home for Dirty Politics, shopping it with distributors and studio heads.

As for Jimmy Breaux the candidate, you can catch his latest spots now on YouTube and other Web sites. After all, the big election isn’t until November. Breaux still has a few months to introduce himself to voters as an alternative, albeit more of a comical relief, to the two men leading the charge atop the ballot. “If you don’t want to vote for your grandpa, or some secret Muslim, Al Qaeda spy,” the candidate says in one online video, “vote for me — Jimmy Breaux. A real man.”

Well, not completely real, but we’ll take what we can get these days.