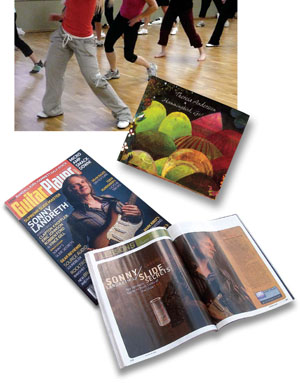 SPOTLIGHTING SONNY
Sonny Landreth owns the cover of this month’s Guitar Player magazine. In an interview that spans 15 pages (with an additional six-page “Master Class”), Lafayette’s native stepson and Breaux Bridge resident talks about his new, highly acclaimed album, From The Reach, on his own Landfall Records label. The article also gleans insight from Landreth’s musical guests on the record — like Eric Clapton, Eric Johnson, Vince Gill, Mark Knopfler and Robben Ford. Clapton says of Landreth, “Sonny’s technique is astonishing and totally unique, but even with all that, he still delivers everything with elegance and great care. Sonny is a great player and a great guy.” The current October issue of Guitar Player is on newsstands now. For more information on Landreth or From The Reach, visit www.sonnylandreth.com. — R. Reese Fuller

ZUMBA NATION
About a year ago City Club at River Ranch identified a hot new dance-based fitness craze that’s not only caught on with its membership but is now spreading to other clubs. Red’s just recently jumped on the Zumba bandwagon, offering $48 sessions (once a week for about a month) for members, and other facilities are now advertising Zumba classes. City Club incorporated the Latin-based cardio workout into its lineup of exercise classes offered to members, now holding five classes a week with plans for a sixth in October. “It’s high energy but medium impact,” says Nathan Pry, City Club’s fitness director. City Club has five Zumba-certified instructors, with the closest certification class in Florida. Zumba Fitness was created in the mid-90s by Colombian native Alberto “Beto” Perez, a celebrity fitness trainer and choreographer for international pop superstars. Inspired by the traditional cumbia, salsa, samba and merengue music he grew up with, Perez paired his favorite pulsating Latin rhythms with the red-hot international dance steps his clients loved, giving birth to Zumba (Spanish slang for “to move fast and have fun”). “You don’t have to be a dancer to enjoy this class,” adds Pry. “This is for everybody.” For more info, call Red’s at 984-7256 or City Club at 406-2582. — Leslie Turk

SINGS LIKE A BIRD
When the liner notes of a CD start off noting that the artist “plays all strings and things like Barq’s root beer bottles, saw, wine glasses, high-heeled clogs, drums, slide whistle & slide violin,” you know you’re in for either a musical sweet dream or a cacophonous nightmare. Fortunately, for Theresa Andersson’s Hummingbird, Go!, it’s the former result and not the later. Recorded in her kitchen, Andersson’s sweet voice is featured front and center. The 12 tracks blends together an ethereal and satisfying experience from the Swedish-born New Orleans singer/songwriter. And even if isn’t the cup of tea you might have steeped for yourself, Hummingbird, Go! leaves you longing for a second cup. Hummingbird, Go! retails for $15 and can be ordered online at www.basinstreetrecords. For samples of the CD and to watch a clip of Andersson performing “Na Na Na,” visit www.myspace.com/theresaanderssonmusic. — R. Reese Fuller