Traitor goes deep inside the war on terror. 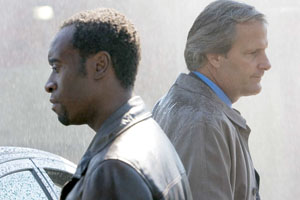 The light from the blaze flickers in the eyes of the young boy. Just a breath ago, the merciless Middle Eastern sun was the brightest fire in his world. His father — the man who taught him to play chess, who prayed with him daily and devoutly, who taught him and talked to him —  stood in the courtyard only a second ago, waving and smiling, stepping into the small car. Off on an unknown errand, now felled by an unknown assassin. The young boy watches in silence as the spot where his father once stood burns out of control, the debris from the exploded car and the fragments of the boy’s exploded world melding in the intense heat of a life-changing moment. Something is born behind the eyes of the boy as he holds his breath in grief and stares, unbelieving, something deep and fierce and deadly. But what is it? That is the question that consumes most of Traitor.

Years later, the boy has grown into a man, a Sudanese-American hybrid named Samir Horn (Don Cheadle), who drives a truck of bomb detonators into a Yemeni courtyard. He’s looking for an old friend, a brother-in-arms mujahedeen from the fight in Afghanistan who might want to buy them. He finds instead Omar (Said Taghmaoui), a new brother, who will draw him deep into a dangerous world, introducing him to the deadly duo of Fareed (Aly Khan) and Nathir (Raad Rawi). At their first meeting, the grandfatherly Nathir pours Samir a cup of tea and then reminds him in a measured tone that terrorism is theater, played out on an international stage for an American audience.

Samir is a talented actor. The scars from Samir’s father’s death are hidden, like so much else. He is a very careful man — he considers information and its disclosure as incendiary as the homemade bomb materials in which he traffics and handles both with a steady delicacy. But there’s a whirlwind at his back, the furious storm that feeds the world of international terrorism and propels him from Yemeni prison escapes to street-corner cafes in Marseilles and Toronto to the labyrinthine streets of Chicago — and frequently into the path of FBI agent Roy Clayton (Guy Pearce).

Clayton is himself a complicated man. The Southern son of a Baptist preacher, Clayton bucked the family tradition of the pulpit and got an advanced degree in Arabic studies. Unlike his more boorish, ugly-American partner Max Archer (Neal McDonough), Clayton has learned the languages and customs — and religion — of the informants he cultivates. He believes a straight question in a forceful, respectful drawl (and a little leveraging of fear and reward) can draw out more cooperation than the brute crowbar of physical violence. He follows Samir’s trail around the world, always just a step behind, wondering what kind of man he almost has in his sights.

Novice director James Nachmanoff plots and paces his script extremely well. It’s a smart and solid narrative, one he cowrote with Steve Martin (yes, the wild and crazy guy himself). Horn and Clayton together provide a crash-course microcosm of the war on the terror — its complexities, its casualties and its urgencies. The plot isn’t overly complicated, a la Syriana, or dumbed down into some kind of a melodramatic Wild West finale, a la The Kingdom. Nachmanoff’s terror is an intricate dance leading up to a single act of devastating simplicity, and he never overplays his own story. In keeping with the film’s straightforward, smart vibe, director of photography J. Michael Muro bathes every scene in the light of an artful realism.

What saves the quiet film from ever being boring is the engaging grace of Cheadle. His Samir is blank without ever being empty. He’s buttoned down so tightly that even when he wants to weep he can’t, turning his face up to the raining heavens instead, the water on his cheeks, like so much in his life, a lie that tells the truth. The farther Samir walks, the twistier his path becomes. In the war on terror, he is simultaneously the cause and the effect, the victor and the victim.

He is the film’s constant casualty. If his motives remain at least somewhat obscured and uncertain for most of the movie, though, they are eventually brought to the surface. Traitor has less to say about the politics of terror and the fight against it and much more to say about this conflicted character standing at its very heart. Like the film around him, Cheadle’s Samir is quiet, subtle and just complicated enough to be real.