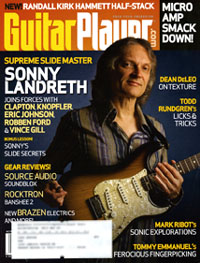 Sonny Landreth owns the cover of this month's Guitar Player magazine. In an interview that spans 15 pages (with an additional 6-page "master lesson"), Lafayette's native stepson and Breaux Bridge resident talks about his new highly acclaimed album, From The Reach, on his own Landfall Records label. Guitar Player writes:
Driven by Landreth's otherworldy bottleneck playing, the new album nails all points on the coolness curve with its inspired songwriting, lyrical depth, and abundance of great guitar from this all-star cast. It's no secret that Landreth has elevated the state of rock guitar via his amazing slide technique, which involves fingering notes and generating harmonics on the "left side of the glass."
Guitar enthusiasts will love Landreth's thorough explanation of not only his playing techniques but also his gear. There's also insight from Landreth's musical guests on the album - like Eric Clapton, Eric Johnson, Vince Gill, Mark Knopfler and Robben Ford. Clapton says of Landreth, "Sonny's technique is astonishing and totally unique, but even with all that, he still delivers everything with elegance and great care. Sonny is a great player and a great guy."

Landreth also recounts seeing B.B. King at Leo's Rendezvous in New Iberia when he was only 16 yars old, as well as seeing Clifton Chenier for the first time at the Blue Angel in Lafayette. There's also the story of a younger Sonny meeting a sleepy Jimi Hendrix in the gift shop of a Baton Rouge hotel.

The current October issue of Guitar Player is on newsstands now.