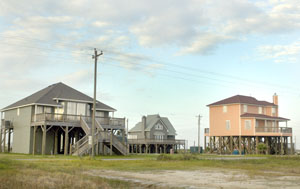 At 7 p.m. last night, all was quiet on the western coast of Louisiana. Houses are shuttered from Holly Beach to Johnson Bayou. The Cameron ferry is shut down, so the only road in and out is the western leg of La. 27, which was a ghost highway all the way down to the beach. At Holly Beach, three years ago, following Hurricane Rita, all that remained of the honky tonk town were a few pipes sticking out of the sand and water-filled hollows where wind and water had scoured away even the foundations of homes. Yesterday, beach front lots were sprouting high-end pastel-painted cottages, sturdily standing on top of 17-foot tall pilings. There is still no place to buy a beer or a shrimp poboy, but Meaux’s Seafood market has returned.

Paul and Dan Perry, (Paul is Dan’s uncle), both doctors from Lake Charles, were struggling to haul out a pair of boats they had brought down to the coast for the opening day of teal season, which is tomorrow. Dan had a flat on his trailer, and they were busy trying to stack the busted trailer onto the top of a flat boat, then pile on a pirogue. Behind them, Cameron Parish Sheriff’s Department deputies were conducting a sweep of the beach towns, making sure everyone was out by the 9 p.m. curfew.

At dark, under a gibbous moon, beaches were rapidly being covered by a rising tide, chocolate milk colored surf with four-foot tall waves banging the edge of La. 82, the Hug the Coast Highway. Weather reports this morning are describing four to five feet of water over the highway and into the streets in front of the Cameron Parish Courthouse. Following Hurricanes Audrey and Rita, the 1930's courthouse was the only building left standing in the town of Cameron.