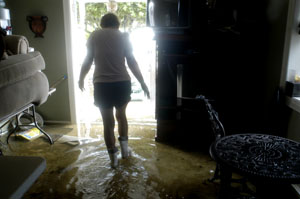 As Hurricane Ike’s flood waters recede and Acadiana residents prepare to go home and assess the damage, larger questions loom about the future of life in coastal Louisiana. “I think around 60 (percent) to 70 percent of the people (whose homes) were destroyed won’t come back ,” Clifton Hebert, emergency preparedness director in Cameron Parish told The Advertiser. From St. Bernard in eastern Louisiana to Cameron on the state’s western marshes, every coastal parish suffered flooding, and in the case of southwestern Louisiana, waters rose higher than they did during Hurricane Rita in 2005.

While the national media are focused on Ike’s path of destruction through Texas, Louisiana Senator Mary Landrieu vowed to bring home long awaited federal funding for levees, floodgates, barrier islands and coastal restoration to the Bayou State. “It’s hard to believe this is happening again,” she told the Daily Iberian Saturday while touring storm damage in Erath, “I think people who went through Katrina and Rita thought it’s a once in a lifetime catastrophe and here we are with another catastrophe three years later. No one deserves to have this happen once in their life, let alone twice. Not only are we losing money and businesses but we are losing our way of life. These storms are decimating our culture and our community and it has got to come to an end.”

(Janora Arceneaux surveys the damage to her Delcambre guest house which was at ground level. Her home, elevated to 14 feet, was not flooded. Photo by Terri Fensel)