The Coen Brothers should have taken their own advice with Burn After Reading. 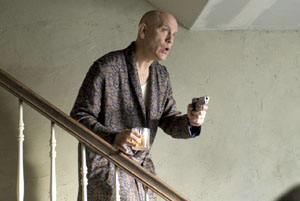 The best thing Osborne Cox has going for him is his good name. Not his reputation as a distinguished, brownstone-living Princeton alumni, not his lengthy resume as an intelligence gatherer in the employ of the Central Intelligence Agency. No, it’s not his name in any sense of metaphor. It’s actually just the very syllables of his name. Osborne Cox. Ozzie, for short.

Somehow, it’s easy to think of the eccentric John Malkovich sitting down to a table read and walking away with a vision of the odd Ozzie bursting from his brain, a la Athena. With a name like that, this is what follows: frustrated middle manager with delusions of grandeur replacing institutional respect and recognition. Cuckolded husband wound tighter than his signature bow tie, his hair-trigger temper exploding into symphonies of profanity and spite. Smart man looking forward to nothing so much as precisely slicing up the limes that accompany his (too-constant) cocktails. Unwitting, unwilling center of crossed wires and mistaken identities that fuel Burn After Reading. In other words, Ozzie! Surely you recognize him. He’s the seed of an almost-interesting idea that never sparks to life.

It can’t have been easy for Ethan and Joel Coen to catch their breath after the award-winning, accolade-laden No Country for Old Men. Becoming the toast of the town after dwelling quite happily on the outskirts for so long had to be an out-of-body experience. (One body, as the two remain solidly and artistically attached at the hip.) It might have even been a factor in driving them back toward screwball comedy for Burn After Reading. But it’s the nasty nuance, the full-throated absurdities, of No Country that make Burn so painful. These guys have proven they can take something as elemental as a name (Anton Chigurrh) and pair it with a risk-ready actor (Javier Bardem) and have it all become something big and whole and more. As great a movie as it was, No Country was even greater for what it was not. And there’s just none of that glorious negativity in Burn. Thinly sketched characters remain skinny; a wacky world closed in on itself stays claustrophobic.

Our friend Ozzie is informed at the beginning of Burn that he’s being unceremoniously ushered out of the Agency and into an empty, emptying job at the State Department. He refuses, quitting on the spot, prompting his philandering pediatrician wife (Tilda Swinton) to consider divorce. Between trysts with shallow Treasury agent Harry (George Clooney), she secretly downloads files from Ozzie’s home computer onto a CD. The CD promptly falls out of the gym bag of a law-firm secretary and into the hapless hands of gym employees Chad (Brad Pitt) and Linda (Frances McDormand), who decide to see what they can get for the “top-secret” information they think they have. What they get, of course, is trouble.

What the audience gets is an excruciatingly unfunny, slapdash story about stupid people doing stupid things stupidly. As silly as the film is, it could have been worlds better if the all-star ensemble inhabiting it had actually acted like, well, they were actors. The kind that are good. And believable. And committed to character. Malkovich is the only one of the main stars that gets a pass (and he’s matched only by bit players JK Simmons and David Rasche as real CIA operatives trying to make sense of the mess around them). Malkovich’s Ozzie teeters on the verge of angry greatness, his orchestral voice finding 150 different ways to drop the f-bomb with flourish. Like Ozzie, though, Malkovich is surrounded by morons.

As the spandex-wearing, hopelessly hanging Chad, Brad Pitt amuses in small doses, but his climactic scene gives way to a hey-I’m-Brad-Pitt-acting-goofy realization that undercuts his previously likeable lunacy. Someone apparently told George Clooney that making googly eyes is an adequate substitute for any kind of a demonstrable sense of screwball humor. (For reference, see every other “funny” Coen Brothers movie he’s ever been in.) Frances McDormand, God bless her, just has no business being Linda; she never quite sells the blonde wig, and she certainly never finds the heart underneath Linda’s self-improvement obsessions.

The Coens have always been enamored of absurdity. Even their most serious output has been touched by the idea that life is laughably random, its trajectories too easily altered by the most inane of happenstances. But, with a wink and a nod and a knowing grin, they have — in the past — been able to make the void attractive, alluring and incredibly tangible. Burn, simply put, signifies nothing. And that’s the most absurd development of all.