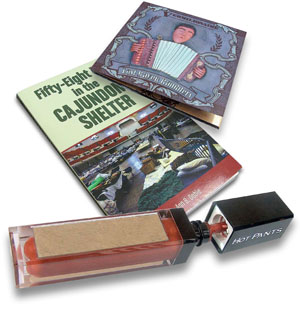 LIGHTEN UP
Reapplying lipstick in the dark is a thing of the past, thanks to Hot Pants’ Lip Lust product. The tube comes with a built-in LED light hidden in the cap that automatically turns on when open and a side panel mirror that allows you to apply makeup even in the darkest places. This lip volumizer, available in satin, shimmer or sparkle, has cottonseed oil to fill fine lines and add shape and fullness. Squalane, soy protein and almond oil moisturize your lips without that sticky feeling some other plumpers create. Available in six shades, Lip Lust, $20, is sold exclusively at kiki in River Ranch. Call 406-0904 for more info. — Leslie Turk

RAMBLE ON
The good’ole rambling boys from the Lost Bayou Ramblers have done it again—released yet another album of incredible floor pounding dance hall Cajun songs. Recorded at Dockside Studios in Maurice and produced by Chris “Frenchie” Smith, Vermillionaire (Bayou Perdue Records) contains no jive studio trickery or $cash$ hungry novelty tunes. The album spins pure dirt-earth Cajun country traditionalism, proficiently reimagined in the present by a band at the peak of their sonic and spiritual powers. This is a band that in no way budges from the unpolluted rootsy aesthetic of making real-sounding music for real-acting people. — Dege Legg

GIMMIE SHELTER
One bad storm recalls another. As the flood waters recede from Hurricane Ike, allowing residents to return to survey the damage to their homes, a new book by retired UL English professor Ann Dobie takes a look at those who took shelter from the storms of Hurricanes Katrina and Rita in Lafayette. A new release from Pelican Publishing, Fifty-Eight days in the Cajundome Shelter, $15.95, is an intimate glimpse of some families who fled the chaos of those storms, only to be battered by the confusion of federal red tape, while they tried to make sense of what their lives would become. Heart-breaking and courageous at once, this is a must read for anyone who spent time as an evacuee or aid-worker during the dark days following the hurricanes of 2005. Dobie will be signing books in the Cajundome Conference Room 24 on Sept. 20, from 2 to 4 p.m., and at Barnes and Noble on Oct. 30, 2 to 4 p.m. For more information on the author, go to www.anndobie.com. — Mary Tutwiler