Worn year round in these parts for protection from the sun, designer shades are also a high-fashion statement. 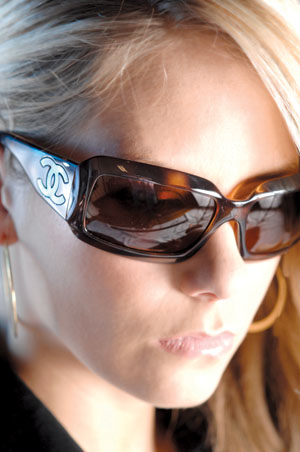 Two pieces of tinted glass in a simple plastic, acetate or metal frame. Not so fast. When it comes to sunglasses, both men and women seek out a lot more than the basics. Designer sunglasses are a fashion staple of today’s wardrobe.

Because shades are worn year round in our semi-tropical climate, they’re an accessory most people don’t leave home without. For some time, several Acadiana stores have carried top sellers and fashionable brands, and now Chanel, one of the most popular lines in the world (perhaps thanks to the girls of Sex and the City), is available locally at LA Specs. Coco Chanel, the pioneering French designer whose menswear-inspired looks, little black dress and quilted handbags revolutionized 20th century fashion, remains one of the most sought-after brands — and among the most difficult to secure.

“We started trying to get them probably eight months ago,” says Richie Rabalais, who manages the River Ranch optical store. “When the store opened we began to get so many people coming in and asking for Chanel.” Only 5 percent of the optical stores in the country are approved to carry the line, Rabalais maintains, so bringing the brand to Lafayette was quite a coup. “It’s very exclusive. They are very particular, very protective of the brand.”

LA Specs offers about 25 styles of Chanel sunglasses, priced from $340 to $570, and another 20 styles frame prescription lenses, which range from $300 to $425. The sunglasses provide 100 percent UV protection, are scratch resistant and come with a 24-month manufacturer’s warranty. Each pair also has a serial number so there’s never any question about authenticity.

Customers are drawn to the brand for a variety of reasons. “It’s unmistakable, classic styling,” Rabalais says. “You’ve got that familiar CC logo. Some of it’s the retro styling.” All of Chanel’s frames incorporate images or pieces from the line’s wildly popular handbag collection.

It’s appealing to most stylish women to have some bit of Chanel in her wardrobe, adds Rabalais, noting that the design house’s sunglasses, like its handbags, are an investment in proven timeless fashion. “You may not be able to afford a Chanel handbag, but you can afford a pair of sunglasses,” he says.