With its pro-active policies, Lafayette Utilities System has consistently fared better than other area power companies in restoring electricity to customers after a major storm. 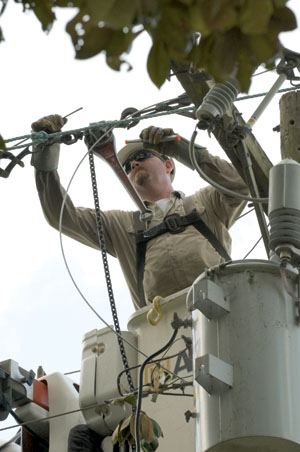 Monday morning, Sept. 1, Hurricane Gustav was coming ashore across southeast Louisiana. Sustained winds in Lafayette were picking up to 30 to 40 miles per hour. Before the worst of the storm came through, Lafayette Utilities System’s crews were busy checking lines and trying to restore power that had already been knocked out in some areas. Around noon, LUS Director Terry Huval got notice that his crews were about to go in and replace a pole and fix a feeder line at the corner of Kaliste Saloom Road and Rosedale Drive — about an hour-long job. With winds continuing to escalate, Huval questioned the decision.

“I was concerned about those guys being out there,” he says, “but I left it up to them because that’s what they do; I don’t. And they got that pole back up and got those customers back in.

“Part of what I’m thinking,” he continues, “is that we’re going to go through all this trouble and the wind’s going to pick up and it’s going to knock that feeder out again. Well, those customers’ [electricity] stayed on the entire storm. So, it was the right thing to do.”

Huval doesn’t try to hoard credit for LUS’ success in restoring power quickly to its customers following major hurricanes. He says the beauty of LUS’ storm plan is that it runs smoothly without him. LUS crews are well trained in what to do, and Huval is free to concentrate on any unexpected issues that arise.

“We have a very well thought out emergency response plan,” he says. “And it’s not just a book that sits on a shelf that we look at when a hurricane comes in the Gulf. It’s something that we consciously update every year based on lessons learned. And we have training or refreshers with our employees every year to make sure they understand what their role is when a hurricane comes in.”

The public utility’s record speaks for itself. In the past six years, Lafayette has faced three major hurricanes. In 2002, Hurricane Lili — the worst of the storms from Lafayette’s perspective — knocked out power across Lafayette. LUS managed to get 25 percent of its customers back on that night, and five days later everyone had juice. For Hurricane Rita, 60 percent of LUS customers lost power, all of which was back on in 4.5 days. With Hurricane Gustav, only 40 percent of its customers lost power. Three days and four hours after the storm left town, LUS turned the lights back on for its few remaining customers still in the dark. Each time, LUS either matched or was ahead of the time it took other area power companies to restore electricity.

LUS’ response to Gustav is even more impressive when you consider that many in Acadiana went up to five and six days without power. In the Capital City, many customers were in the dark for more than a week. The lagging power outages prompted some sharp criticism, mostly directed at Entergy, Louisiana’s largest power provider that serves the majority of the Baton Rouge area. Gov. Bobby Jindal called Entergy’s original timeline of two to three weeks for restoring power in Baton Rouge “unacceptable.” Public Service Commissioner Foster Campbell has perhaps been the power company’s most outspoken critic. Campbell recently told The New York Times: “There’s a great irony here: we have some of the poorest people in the country, and some of the highest utility rates in the Southeastern U.S.” He added he was “not interested in giving Entergy any [public] money for this storm.” Some utility officials also have been quietly critical of Entergy’s maintenance of its transmission grid, which other power providers must also rely on.

Entergy stands by its performance. Company reps note that power was restored faster following Gustav than hurricanes Katrina and Rita, even though Gustav appears to have wreaked more havoc on its transmission lines and equipment. Last week, Randy Helmick, Entergy’s vice president of transmission, defended the company’s response before the state Public Service Commission by pointing to the small army of support staff Entergy brought in to help expedite the process. Entergy reportedly shipped in an additional 13,200 workers from 33 states in Gustav’s aftermath. The Baton Rouge Advocate reported that Helmick even went so far as to compare the job of mobilizing and providing for the extra crews as being on par with the U.S. military’s invasion of Grenada in 1983.

In the Acadiana region, where Entergy serves customers in six parishes — St. Landry, St. Martin, Lafayette, Iberia, Vermilion and Acadia — Entergy brought in an additional 659 workers to help restore power. Of Entergy’s 40,000 customers in the region, 93 percent lost power during Gustav. Company spokeswoman Liz Duhon says by Sunday, Sept. 7, the company had restored power to all of its Acadiana customers except for the Port Barre area, which got turned back on Monday and Tuesday.

Slemco reports that of its 93,469 customers throughout an eight-parish Acadiana region, 91 percent lost power during Gustav. Company spokeswoman Mary Laurent says Slemco had power back up to all its Acadiana customers by Saturday, Sept. 6, with the exception of 3,359 customers in Krotz Springs and Melville, where an Entergy transmission grid outage caused further delays. Laurent says Slemco brought in an additional 850 to 900 workers, from as far away as Oklahoma, Missouri and Ohio, to help locally with restoring power. The company used the old Evangeline Downs site as its staging area.

Huval notes that while larger private utilities like Slemco and Entergy can pull in their own crews and resources from other areas, LUS typically relies on partnerships it forms with other public utilities from across the country. LUS reported having an additional 450 people on hand to assist its crews after Gustav, the majority of which came from Texas. The additional help doubled the public utility’s entire staff and meant that LUS had 10 times the number of linemen it typically has.

“Terry Huval being past president of the American Public Power Association is an asset to Lafayette,” says Dee Stanley, chief administrative officer of Lafayette Consolidated Government. “When Terry picks up the phone and calls, people come, and they get here and get [the job] done.” All the invoices have yet to come in, but based on past hurricanes, Huval is estimating the additional resources will cost LUS just north of $2 million — an expense that should largely be reimbursed by the state and federal government.

LUS’ response may have shined partly because the city of Lafayette escaped the brunt of Hurricane Gustav. LUS also did not have to contend with the massive devastation caused by tornadoes in some surrounding parishes.

For his part, Huval attributes the public utility’s quickening storm response to a number of factors. For starters, he says, LUS’ linemen work right up until the storm hits and are back in the field immediately afterward. (The general policy is to bring all linemen in when winds start to get above 30 to 40 miles an hour.) For Hurricane Gustav, LUS crews worked till about noon on Monday when the storm hit, and then were back in the field working at 4:30 p.m., continuing till 11:30 that night. The next day, they were back out at 6 a.m. “When these things happen our linemen are very anxious to get out in the field and get the lights back on,” Huval says. “That’s when their adrenaline factor hits.” Other utility companies’ crews also began working Monday night, but because they were contending with more bad weather and fallen trees, they were still wrapping up damage assessments as late as Wednesday.

Other factors that Huval says worked in LUS’ favor include an aggressive tree trimming policy, providing greater clearance between lines and tree branches; diligent maintenance of its lines and poles, and a progressive policy in place since the ’70s that requires all new developments to have underground distribution lines. Developers, however, must pay the cost difference between hanging and burying lines. LUS says 40 percent of the city’s distribution lines are now underground.

Addressing a question he says comes up after every hurricane, Huval says while burying new distribution lines makes sense, the job of burying existing overhead lines is cost-prohibitive. (LUS also still runs new main transmission and feeder lines, which are very expensive to bury, above ground). Estimates for burying all the city’s existing overhead lines would cost more than $600 million — an expense the utility would have to pass on by almost doubling a majority of its customers’ electricity bills. “I have a hard time imagining the citizens and the businesses wanting to spend that much money to put lines underground anywhere,” Huval says.

“One of the things to aid in the recovery,” Stanley says, “is to keep people from going off [power] in the first place. The fact that we had 50 mile-an-hour tropical storm sustained winds and gusts over 70 miles-per-hour, and 60 percent of [LUS’ customers] stayed on, that’s a result of what they do during the year when we don’t have hurricanes.”