Ghost Town is a sweet, silly — and decidedly not stupid — romantic comedy. 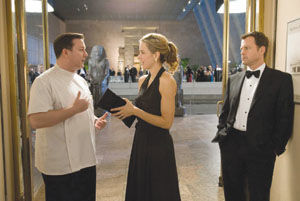 Three’s a crowd: Bertram Pincus (Ricky Gervais) woos the widow (Tea Leoni) of the ghost who is haunting him (Greg Kinnear) in Ghost Town.

This is all you really need to know about Dr. Bertram Pincus to start: When the Manhattan dentist discovers he can converse with the dead, he is overwhelmed by one all-encompassing emotion. Not fear. Not dread. Not wonder. He isn’t curious. He isn’t spooked. What he is, with every fiber of his now supernaturally tuned being, is annoyed. Terribly, fussily put out to find himself living in Ghost Town.

Pincus (Ricky Gervais) is what those in polite society would call a curmudgeon — and the rest of us would call a class-A jerk. He isn’t friendly with the fellow dentists at his practice, shunning their attempts at chitchat and sneaking out rather than sharing a slice of cake and a bit of bubbly in celebration of the birth of one of his colleague’s new baby. Rather than spend one moment in simple small talk with a patient, Pincus shoves a roll of gauze into her cheek, rendering her constant stream of seemingly happy-go-lucky chatter unintelligible. When his day is done, he walks the few short steps to his apartment. He ignores the doorman and fails to hold the elevator for a neighbor struggling with an oversized box, retreating to his perfectly appointed, nothing-out-of-place apartment where it is unfailingly quiet and he can be gloriously alone. Pincus isn’t a glass-half-empy kind of a guy. He’s a why-are-you-asking-about-glass-and-not-just-minding-your-own-business guy.

Until the incident. A routine colonoscopy takes an unexpected turn. Under a general anesthesia, Pincus dies on the table for seven minutes. When he comes back, he brings a few new friends with him: every single dead person haunting the streets of New York City. And each of them has unfinished business: the dad who knows where his kid’s favorite stuffed animal is stuck; the mother whose last letter to her daughter slid underneath the carpeting and was never found; the construction crew whose members know that their deaths were accidental, even if the crane operator working that day still thinks it was all his fault. Most bothersome of them all is Frank Herlihy (Greg Kinnear), a tuxedo-wearing, philandering fast-talker who dodged a falling air conditioner unit only to be run over by a city bus seconds later.

When he left this world so surprisingly and unceremoniously, Herlihy left behind an unsuspecting wife Gwen (Tea Leoni). Gwen has now moved on to a new guy, Richard (Billy Campbell), and Frank is none too happy. He wants Pincus to break them up, and in return, he promises to corral the ghosts who follow Pincus through the park and crowd into his bedroom at night. One glance, and Pincus is in. (Never mind that she lives in his building and is well-aware of his bad attitude.) His grumpy demeanor goes immediately to war with his growing attraction to Gwen, a quirky Egyptologist whose offbeat humor and clumsiness end up somehow making her a better match for Pincus at times than for the suave, serious human-rights-lawyer Richard. Complications ensue, of course, some otherworldly and some not, all experienced through the increasingly flustered, fractured Pincus.

Bertram Pincus is the first chance for most American audiences to meet Ricky Gervais, and he’s not too bad of a pick. The British comedian is perhaps best known as the creator of The Office and the star of the show’s original British incarnation. Gervais’ signature shtick stems from the socially awkward, his characters clueless and kind of grumpily selfish. His David Brent (the British Office’s Michael Scott) is uncomfortably funny. And yet there is a sweetness to his painful portrayal of Brent, who spends his life meandering down a primrose path of good intentions terribly twisted and gone horribly wrong. Pincus is a kind of sweet-and-sour lite, one of Gervais’ Scrooge-ish misanthropes softened only so slightly for the conventions of the rom-com genre.

It works for two reasons. One is the cast. Gervais is at absolute ease before the camera. Even his irritability is interesting and amusing. Leoni and Kinnear add to that air of intelligence; both hearken back to the good old days when comedy was smart people playing smart, if quirky, characters.

The second reason the film works is the light touch of veteran screenwriter David Koepp. He keeps Ghost Town frothy and funny and slight off-center and sets it in the beautiful melancholy of fall in New York. Ghost Town is a victory of even-keel-ness, never straying far from its strange little world view and, when it does veer a bit, always course correcting and remembering its own voice.

There’s a lovely moment in the movie, during one of Gwen and Pincus’ first encounters. The conversation has been as stilted and strange as ever, until the two find unlikely common ground examining the decayed jawbone of a royal mummy. The moment ends, awkwardly, and Pincus offers Gwen a sugar-free sweet. As he turns away to lean on the table, she sees what we see — the tag still firmly attached to the new shirt he bought for what is to him this most special of occasions. She notices and smiles slightly but only turns away to lean on the table just as he has.

Sweet. Silly. A little bit sad. Movies like Ghost Town make it almost believable that watchable romantic comedies can indeed be brought back from beyond.