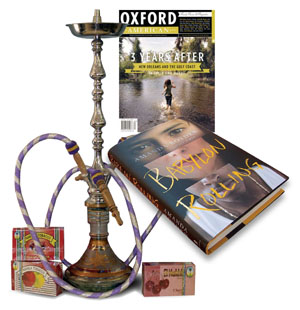 GAINES ON LOUISIANA
In its latest issue, The Oxford American, “The Southern Magazine of Good Writing,” focuses on New Orleans and the Gulf Coast three years after Hurricane Katrina. While most of the issue focuses on the New Orleans area, Lafayette is accounted for in a piece by UL Lafayette’s writer-in-residence emeritus, Ernest J. Gaines. “Louisiana Bound” is an address that Gaines gave in 2006 in Baton Rouge and is also the introduction to his forthcoming book This Louisiana Thing That Drives Me, to be published by UL’s Center for Louisiana Studies in 2009. For more information on The Oxford American, visit www.oxfordamericanmag.com. — R. Reese Fuller

KEEP ON TOKIN’
If a hookah-smoking caterpillar is your vision of the ancient practice of social smoking, think again. The tall elegant water pipe with multiple hoses is a tradition in the Middle East, fashionable in socialities where alcohol is prohibited. Cedar Grocery carries a variety of hookahs ranging from $50 to $150, depending on he size and the number of hoses. The Lebanese market also imports a number of flavored tobaccos as well as the natural charcoal preferred by smoke aficionados. Try cherry- or strawberry-flavored tobacco for a light, fruity drag, or toke on the coffee-molasses tobacco to hit those deep notes. Tobaccos run $6-$7. Call 233-5460 for more info. — Mary Tutwiler
**
CITY OF BABEL**
Juggling the story of a jambalaya of families — black, brown, white; Creole, Indian, and WASP; newbies and generations established, all living on the same block in New Orleans, takes the skill of a circus performer. Fortunately, author Amanda Boyden has the chops, as a former circus trapeze artist and contortionist. She also happens to hold an MFA from UNO, where she teaches writing. Babylon Rolling, her new novel, depicts the lives of a street full of folks, circumscribed by the environmental tensions of the Crescent City a year before the levees broke, as well as the racial tensions skimming beneath the surface of the Big Easy. It’s a book fraught with foreshadowing. Hurricane Ivan has given the city a pass. But you know and I know, Katrina is lurking in the near future. Babylon Rolling retails for $23.95 and is available in Lafayette at Barnes and Noble and Books-A-Million. — Mary Tutwiler