Ad exec George Graham goes for gold on a national scene with his Bluesiana Burger. 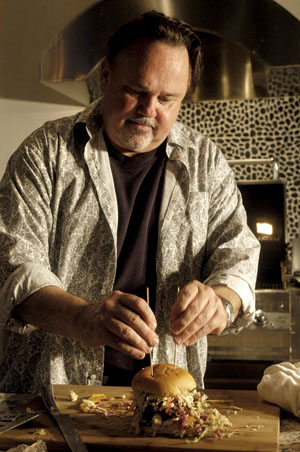 Spicy, saucy, crunchy, colorful. There’s nothing ordinary about George Graham’s Bluesiana Burgers with root beer glaze, topped with Zydeco sauce and Mardi Gras slaw, which he’ll be cooking this week for eight esteemed judges from the culinary world in the Annual Sutter Home Build a Better Burger competition in Napa Valley, Calif. Graham’s recipe is one of five finalists in the beef category for the 18-year-old national recipe contest and cookoff at Sutter Home Winery.

Courtesy of the contest, Graham leaves Wednesday, Sept. 24, for Napa Valley and on Saturday will have three hours to prepare his burgers solo. If you tune your TV set to the Today Show Monday morning and see the local ad exec’s familiar face, you’ll know he took home the $50,000 grand prize — one of the country’s top cooking prizes.

The journey started more than a year ago, when Graham and his wife, Roxanne, were watching the Food Network air the tension-filled burger contest. His wife turned to him and said, “You could do this.” Taking on the challenge appealed to the passionate cook, who grew up in the restaurant business in Bogalusa and was an original investor in Hub City Diner, so Graham spent the next six months concocting his recipe. He spikes his beef with Tabasco; simmers a sweet and spicy glaze based on root beer, chili sauce and Steen’s cane molasses; stirs up a hot and creamy wipe for the bun; then piles on crisp Napa cabbage and fennel slaw to create delicious bursts of flavor and texture that stood out among this year’s whopping 9,000 entries (there’s also an alternative burger category with a $10,000 prize). “I really hooked into balance and contrast. It’s taste, temperature and texture,” he says. Just last week, Graham finally settled on Fresh Market’s rich, brioche-type buns, which the local store will FedEx to California Friday.

Food Network is filming the contest with plans for a spring airing. Winning, however, won’t be easy for newcomer Graham, as the field includes two former BBB grand prize winners and another recent finalist in Food Network’s Ultimate Recipe Showdown.

“I love a challenge, and representing Louisiana was a way to define the state in another way,” says Graham, noting the state’s national reputation for delicious Cajun food, notably dishes like jambalayas, gumbos and étoufées. If the Bluesiana Burger wins, the Food Network may come to Acadiana to film additional segments for its show, which is further fueling Graham’s competitive spirit. “Food is important to our culture, and having America’s best burger could certainly add to the mystique,” he says.