A new proposal by Lafayette City-Parish President Joey Durel to spread out $100,000 to each councilman for capital outlay projects is getting mixed reviews. 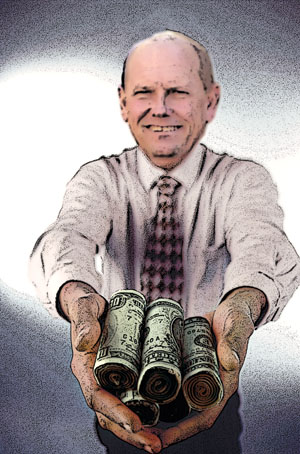 In Lafayette Consolidated Government’s 2009 proposed budget, Joey Durel included what he describes as “an innovative plan,” — a plan which, Durel writes in his introductory budget message, “I believe has never been tried before in this government.” The proposal involves earmarking $100,000 for each of the nine council districts, $900,000 total, to use for capital improvement projects in the coming year. Each councilman will have the sole authority over how his hundred grand is spent in his district, without any required direction from the city-parish public works department or approval from a majority of the council. The funds can also be transferred from one district to another by budgetary revision, which would require a majority vote by the council.

Durel says he envisioned the system as a means for councilmen to address the smaller, neighborhood-type road and drainage issues that arise in their districts and aren’t top priorities for the overall parish. “This is simply a way to try and make government a little more responsive to the people,” Durel says. “I think it gives [councilmen] the ability to move a little quicker on certain projects.”

Durel’s proposal has been welcomed by some councilmen, who see it as a progressive move that allows them more control in assessing the needs of their districts. But it’s also generating some pointed criticism. For some, the plan opens the door to the type of patronage that plagued the old parish police jury government, where capital outlay funds were administered more based on political brokering than the parish’s overall needs and priorities. Two councilmen, William Theriot and Jared Bellard, have questioned the merit of the policy, noting that it puts representatives in a difficult position in deciding where to spend the money in their districts and may cause the public to look skeptically upon the capital outlay process.

Theriot has received several phone calls from concerned constituents over the issue after Durel introduced the proposal in July. Most raised questions over what type of projects councilmen would be using the money for and what the purpose for it was. “Even though what you do may be above board,” Theriot says, “the appearance of an impropriety is not good.” Both Theriot and Bellard are opting to give city-parish Public Works Director Tom Carroll the authority to direct the funds for their districts, to use for projects the department has listed as its top priorities.

Durel points out that he has recommended that any time a councilman elects to tap these funds for a project, it should be required that the project is reviewed publicly at a council meeting as a discussion item. Durel says that public scrutiny should provide enough of a check and balance. “When a councilman says, ‘I want to clean this ditch,’ he’s got to kind of answer to the rest of his district why that ditch was more important than their ditch. So for him to go put money in something that’s insignificant wouldn’t be really wise.”

“That was my theory,” Durel adds. “Now, if at the end of this year, we feel like it’s working very poorly, then we just won’t recommend funding that next year.”

Councilmen won’t have carte blanche to spend the money entirely as they see fit. Public bid law must be followed, and Durel says those projects requiring departmental involvement will have to be accomplished through prioritization within that department. The proposal is also structured so that city funds will not go to parish projects, and vice versa. For projects that fall outside the city limits, the source of the monies is either the parish road and bridge fund or the parish drainage fund — both of which are funded by parish property taxes. The city’s capital improvements project fund (created by a city sales tax) will be tapped for projects within the city limits.

The parish taxes, however, are strictly dedicated to road, bridge and drainage improvements and cannot be used for other capital outlay projects including parks and recreation and public safety. Because of that stipulation, Durel is recommending that city projects also adhere to these restrictions. Furthermore, he suggests a 50/50 split so that each council district will have $50,000 for drainage projects, and $50,000 for roads and bridges.

Given today’s construction costs, several councilmen have questioned how much can actually be done with $50,000. Councilman Bruce Conque, who chairs the council’s finance committee, says the limited funds give councilmen few options. (Conque plans to step down from the council Oct. 1, following its approval of the budget). He notes the funding can’t be rolled over and that councilmen won’t get the benefit of continuous projects. “You have to wonder,” he says, “if you’re limiting it to certain one-year capital improvements, just how far will that money go? How much significance will that money have?”

Pat Logan, LCG’s associate director of public works, says it’s not much. Recent street resurfacing projects are averaging around $105,000 a mile due to the high cost of asphalt and labor. Asphalt is now at $119 a ton, having tripled in cost over the past eight years. Paving a gravel road along with corresponding drainage improvements now costs around $500,000 a mile. Even sidewalks are expensive, running approximately $50,000 a mile without any drainage improvements included. Logan suggests small projects including replacing driveway culverts, excavating ditches or short areas of street overlay may be possible with the district funds.

“It’s not enough [money] to be corrupt,” jokes councilman Conque, who dismisses the notion that the system has any illegitimacy. He likens the proposed district funds to each council member’s annual travel expense fund of $4,000. “It’s discretionary spending on our part,” he says. “I don’t see the difference.”

The council will vote to approve Durel’s proposal, as a part of the overall 2009 operating budget, on Sept. 30. The district funds are listed in the budget as a single line item, identified as “District 1-9 Directed Capital.” LCG’s Home Rule Charter, which lays out the rules and guidelines for LCG to follow in approving its budget, does not prohibit this; however, it does note that the operating budget should include “detailed estimates of all proposed expenditures … to the extent of availability of such information.” Additionally, the charter requires any revisions to the operating budget be approved by a majority vote of the council. The charter also directs LCG to publicly plan capital projects as much as possible. It dictates LCG keep a five-year schedule of proposed capital projects in its Capital Improvements Budget, with “appropriate supporting information as to the necessity for such improvements and acquisitions,” and that a public hearing be held each year prior to its approval.

Along with Conque, council Chairman Don Bertrand says he is generally in favor of Durel’s proposal. While not a lot of money, he says he is already aware of a few small projects in his district the money could go toward. One involves lowering a water line along Verot School Road so that drainage improvements can be made. The state is scheduled to address the issue, but it’s not a top priority. “I don’t know if I want to wait for the state to do it,” Bertrand says.

District 4 Councilman Kenneth Boudreaux says he considers the plan innovative. “It’s an opportunity for council members to get a little bit more actively involved,” Boudreaux says. “This is an opportunity to put something in the proposal form and maybe meet some special needs of a particular district.”

Boudreaux says he plans to confer both with his constituents and the public works director before making any decisions about where to put the money. “I think if you have the confirmation of the public works staff, I think you could justify any work that is done,” he says. “If a councilman chooses to do it independently and on their own, well they may be subjected to more [public] scrutiny.”

For Theriot and Bellard, that’s the reason the public works department should be making the recommendations on which small-ticket capital projects get priority. “Each council member was given this, and they themselves are going to decide arbitrarily where this is going to be spent,” Theriot says. “I guess it was nice of the administration to do, but I just I felt a lot more comfortable letting public works have the authority. That way there’s no doubt; you cannot have the possibility of impropriety or brother-in-law deals if it’s out of my control.”

Durel says he is viewing the district funds as an experiment. “I thought it was worth trying, it was worth discussing,” Durel says.

“Even if the monies were not put in this form by the parish president,” Boudreaux says, “a council member could lobby and champion causes to appease people that are close to him.

“I think the checks and balances,” he continues, “are in being closely involved with your constituents and getting the input from the departments that ultimately will be most affected by it. You’re going to have to answer to somebody.”