With John Kennedy’s strong encampment in the north and Mary Landrieu’s impenetrable fortifications in the southeast, Louisiana’s Cajun heartland could be the battlefield that decides this year’s U.S. Senate race. 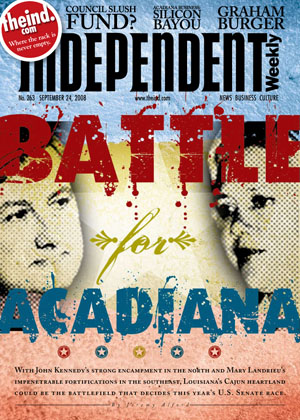 Although it was neither lethal nor front page-worthy, the first sparks seen in the Battle for Acadiana came on Aug. 9 with heavy-handed endorsements from business leaders. It was a way for the incumbent, U.S. Sen. Mary Landrieu, to plant her Democratic flag early in Cajun Country. She had enlisted many of Lafayette’s landed gentry for her mission — mostly rich, white men who would otherwise vote Republican, but are willing, in this skirmish at least, to pose for pictures with and write big checks for a New Orleans lady with liberal tendencies. There are CEOs, attorneys, engineers and board chairmen, and all are veterans of local political warfare.

In retaliation, the opposing campaign of GOP state Treasurer John Kennedy immediately bombed the endorsements with doubts, arguing that the nods may have come from corporate generals, but they wouldn’t equate to winning over the hearts and souls of average voters. To do just that, Kennedy has also been stomping Acadiana terra. He has the support of state Rep. Don Trahan, a Republican with an impressive lock on Vermilion Parish votes, and the treasurer was the beneficiary of a Lafayette fund-raiser hosted last month by none other than First Lady Laura Bush.

To rip a wartime phrase from the Marine Corps, both Kennedy and Landrieu are staying frosty when it comes to Acadiana. They’re on edge and ready to battle. After all, there’s a great deal at stake in the spicy region surrounding Lafayette. Pundits, political analysts and campaign staffers all agree: as Acadiana goes, so goes the rest of the state. That’s why the two camps are preparing to airdrop major resources into the area in coming weeks, from grassroots workers to substantial media buys.

And like most conflicts, there will be casualties. If Landrieu, 52, should lose, it’s unlikely that she’ll pass up the lucrative world offered to those leaving public life. The million-dollar job offers consumed by Louisiana’s former congressional members are evidence of that. Meanwhile, a defeat for Kennedy, 56, could likewise kill any future hopes for federal office. He’s already failed at previous runs for the U.S. Senate and, on the state level, for governor.

Here’s how Acadiana emerged as this year’s pivotal swing region: Kennedy continues to poll strong in Louisiana’s piney north, which was the catalyst for him getting into the race in the first place. Not surprisingly, Landrieu has a stranglehold on her home base of New Orleans, but her performance in the Baton Rouge metro area and the easterly coastal parishes has been just as impressive. In part, that leaves the Acadiana region ripe for an invade-and-conquer scheme.

That Acadiana should be the swing region this year isn’t surprising. Its votes are traditionally up-for-grabs and always difficult to analyze. The hub of Lafayette is trending conservative, but there are several Democratic strongholds throughout the largely Catholic region, which offers a counterbalance. But overall, it’s unpredictable. When Acadiana’s favorite daughter, Kathleen Blanco, a Democrat, won the governorship in 2003, she did so without the help of Lafayette Parish, which instead sided with current Gov. Bobby Jindal, a Republican.

The 7th Congressional District, which covers most of Acadiana’s parishes, was taken in 2004 by a Republican, Dr. Charles Boustany of Lafayette, but it was in the Democratic bracket for several years prior, occupied by the likes of Chris John, Jimmy Hayes (who was a Democrat before switching parties), John Breaux and former Gov. Edwin Edwards.

The 3rd Congressional District, covering the lower end of Acadiana into Terrebonne and Lafourche parishes, is represented by Charlie Melancon of Napoleonville, a conservative Blue Dog Democrat. GOP heavyweight Billy Tauzin preceded Melancon, switching from the Democratic Party halfway through his term with little backlash. Before that, it was former Gov. Dave Treen, an undeniable Republican, in the seat.

To say Acadiana’s politics are convoluted would be an understatement, which makes the coming battle between Kennedy and Landrieu all the more exciting. More to the point, the region’s cohesiveness is a myth bolstered by tourism branding. There are no key ward bosses or organizers and very few get-out-the-vote operations that span the region. Every candidate who wants to win in Acadiana must start out with a fresh slate.

Elliott Stonecipher, a demographer and political analyst from Shreveport, says Blanco’s performance in Acadiana proved that the region is seldom a reliable source of votes for any candidate. “Even though you have a distinct culture there, the area is generally misunderstood,” he says. “There’s the absence of any favorite politician, and voters seem to perform in ways that are not broadly seen in other parts of the state or readily understood.”

But if it’s better suited demographically for one of the contenders, it’s Kennedy, he adds. There isn’t the kind of Democratic concentration in Acadiana like there is in southeast Louisiana, Landrieu’s base. Additionally, its rural voters respond to issues like Social Security and health care, which Kennedy manages to present in a non-hostile, Mayberry kind of way. In short, the region may be his for the taking, but it won’t fall without a fight. “It’s very important for John Kennedy to make hay in Acadiana,” Stonecipher says.

Timing and experience, though, may be enough to push Landrieu over the top in Acadiana, says Dr. Pearson Cross, an assistant professor of political science at UL Lafayette. The Lafayette region is “all about pro-business politics,” he says, and Landrieu has been able to deliver earmarks and jobs to the area for decades. She was in the state House during the 1980s, served as treasurer during the ’90s and has been a member of the U.S. Senate for 12 years. “I wasn’t surprised that the business community came out and backed Landrieu,” Cross says. “I’m also not sure it’s going to convince anyone new to vote for her.”

Black voters in the region’s congressional districts haven’t been as active or vocal as those in Baton Rouge or New Orleans, but they haven’t had a viable candidate to truly test the base or a candidate of color like Barack Obama atop a national ticket to energize supporters. Stonecipher believes there will be a large anti-Obama vote to offset the predicted surge, but Cross says the demographic — 25 percent of Acadiana’s voters — could be enough to matter for Landrieu.

Kennedy communications director Leonardo Alcivar says the GOP side of the ticket is approaching every region of the state as if it’s critical, but Acadiana is a focus. He says voters will likely connect with Kennedy more in coming days than ever before, due chiefly to his financial background as treasurer. With the nation’s housing and banking markets facing a collective crisis, voters could begin to view the race as, “Who do I want playing a bigger role in Washington and on Wall Street during this time?” Alcivar says.

For generations, Louisiana has had a member of Congress that would figure prominently into such national fiscal issues. Former Sen. Russell Long, a Democrat, was one of those faces, as was congressman-turned-lobbyist Richard Baker, a Republican. Alcivar says Acadiana voters will come to place Kennedy in the same mold. At least that’s what they’ll be sold on. “We’ll be swinging through Acadiana more with our message as it gets closer to the election,” he says. “October is going to be the crucial month. We’re going to be putting a lot of resources on the ground, focusing on the retail aspect of the campaign and just trusting our message.”

Scott Schneider, Landrieu’s press secretary, says internally Democrats are predicting Acadiana to be one of the senator’s strongest regions. And it’ll be due more to experience than race, he adds, noting federal dollars Landrieu has secured as senator for I-49 and the Port of Iberia and her unquestionable support for the oil and gas industry. “We’ll be spending the last few weeks of the campaign in Acadiana talking about these accomplishments,” Schneider says. “You’ll see some heavy advertising blitzes and the biggest grassroots operation in Louisiana. I’m talking about in the field, block to block.”

The campaigns will also be carrying out their own forms of political espionage in the vein Sun Tzu’s infamous declaration that, “All warfare is based on deception.” Kennedy has already attacked Landrieu on an issue near and dear to Acadiana — oil and gas. He has labeled her as anti-drilling, even though fellow Democrats on the Hill have chastised her for voting along Republican lines in the past to expand exploration. What’s more, Landrieu ensured that states get a share of the royalties from production in federal waters off their coastlines by co-authoring the bi-partisan Gulf of Mexico Energy Security Act of 2006. Louisiana’s estimated $13 billion over the next three decades will be used for coastal restoration and hurricane recovery.

Chris John, the former Democratic congressman who now serves as president of the Louisiana Mid-Continent Oil and Gas Association, surmises that any Bayou State member of Congress would be pro-oil, regardless of party affiliation, and the attacks are based on national talking points.

But Kennedy does have another smear in his advertising arsenal that resonates better with some voters. Earlier this year, it was revealed Louisiana’s senior senator secured a $2 million earmark for the Voyager reading program — and received $80,000 in campaign contributions linked to company officials. In her defense, Landrieu says her staff did not actively pursue the donations and that the superintendent of the D.C. public school system initially requested assistance for the program.

As for Landrieu’s artillery, she has already assailed Kennedy for being a “flip-flopper.” Formerly a Democrat, Kennedy changed parties when national Republicans began courting him last year for the U.S. Senate. In previous campaigns for governor and the U.S. Senate, Kennedy also ran left-to-center on the issues and even backed Democrat John Kerry for president. In July, he told The Times-Picayune that the endorsement was a “mistake” and that he was “miserable the whole time.”

The strategy of pointing out discrepancies in Kennedy’s newfound conservative record is a smart one for the Landrieu camp. According to Stonecipher, an analysis of Louisiana voting trends dating back to 1900 shows that conservatives poll better during presidential election years, when Republican voter turnout likewise increases. In 1996, the reelection year of former Democratic President Bill Clinton, Landrieu was almost knocked off by conservative figurehead Woody Jenkins, who also won Acadiana that year. During Landrieu’s most recent race in 2002, a non-presidential year, she won another hard-fought battle against Republican Suzanne Terrell but was still unable to sweep Acadiana parish-by-parish.

That’s why it’s easy to frame Landrieu’s recruitment of conservative business leaders as a pre-emptive strike. She even convinced Republicans in the bunch to break the almighty Reagan credo that prohibits speaking ill of fellow party members. While certainly a knock to Kennedy, it could be a sign that Acadiana’s leading Republicans are becoming more moderate and pragmatic. “This is not a race about Republican or Democrat,” says Lafayette attorney Clay Allen, one of the founding members of the ethics-minded Blueprint Louisiana. “This is a race about demonstrated leadership.” Others backing Landrieu include Don Briggs of the Louisiana Oil and Gas Association; Bill Doré of Doré Energy; Bill Fenstermaker of Fenstermaker & Associates; Mark Miller of Merlin Oil and Gas; and Richard Zuschlag of Acadian Ambulance.

Then again, Landrieu is facing off against a man with powerful friends in his corner, like President Bush and the ever-popular Bobby Jindal. Cross says the coming Battle for Acadiana has all the makings for a classic turf war that pits power against power. As such, it’s no wonder that both are mustering troops in the Cajun heartland and launching an all-out assault to influence voters. “It’s going to be a really tough area for both of them,” Cross says. “It’s going to be very competitive, and I think it’s going to be close. There is a great deal at stake in Acadiana this year.”