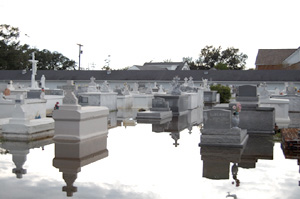 Since Sunday, The U.S. Department of Health and Human Services has been working with officials in Cameron and Calcasieu parishes recovering caskets and human remains disturbed by Hurriance Ike. Officials estimate that 300-400 caskets were distinerred and scattered by the storm surge, with one casket found 35 miles away from its gravesite.

The Disaster Mortuary Assistance Team (which also includes representatives from FEMA and the Louisiana Department of Health and Hospitals) currently has 35 members from Arkansas and Louisiana but is expected to expand to 60 and include pathologists, anthropologists, forensic odontologists, X-ray techs, and medical legal investigators. FEMA spokesman Andrew Thomas says the team will work where it's needed in south Louisiana.

In a statement released yesterday, FEMA says the first step is to gather remains. "This includes getting GPS coordinates and gathering any evidence that can help identify the remains: foliage on the casket to match with cemeteries, clothing families may recall as used in the burial, and so forth." Bodies and caskets will be returned to a temporary morgue to be identified by HSS, and then are returned to the local coroners and governments for re-interment.