Energized by a historic and volatile presidential election, both Republicans and Democrats are boasting record numbers from voter-contact programs. 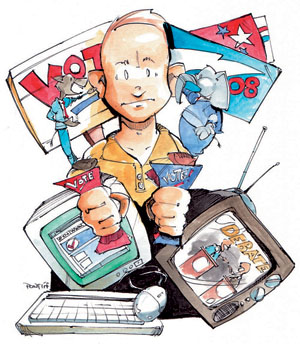 United States mail carriers have an average 500 delivery stops on their daily routes, according to the National Association of Letter Carriers, an AFL-CIO advocacy group. That number fluctuates based on the region, and hundreds of those deliveries could be in one place, like an apartment complex or downtown building. But it isn’t that bad. Most postal workers are allowed some form of transportation, which makes the door-to-door gig a bit more bearable.

Hundreds of volunteers for the Louisiana Republican Party could probably attest to that. Most hoofed it on Sept. 20, a voter-contact day dubbed “Super Saturday” by state GOP Chairman Roger F. Villere. He says volunteers were responsible for knocking on 63,063 doors and ringing 14,400 phones around the state that weekend — all in a single day. Not surprisingly, the figures exceeded all original voter-contact goals. “Across the state, hundreds of conservative activists gathered together to make personal contact with voters in their communities to educate them about our candidates,” Villere says.

Volunteers were sent to the usual places, which include Baton Rouge, New Orleans, Alexandria, Houma, Lafayette, Monroe, and Shreveport. The door-knocking number alone for these regions is hard to swallow, though. If every single volunteer was on the road that Saturday, each one would have had to visit an average of 144.9 homes, based on the GOP data released, and working under the sketchy assumption that volunteers never travel in packs. “It looks like they’re taking their cues from the factually challenged (John) McCain campaign,” says Louisiana Democratic Party spokesman Scott Jordan.

Following a Virginia rally earlier this month that boasted both McCain and his running mate Sarah Palin, the McCain campaign claimed that 23,000 people attended. However, The Washington Post later debunked the figure based on estimates by the local fire marshal. “Inflated, unconfirmed numbers won’t help the national and state GOP in this election,” Jordan adds.

Aaron Baer, communications director for the Louisiana Republican Party, says the skepticism is much ado about nothing, aside from political positioning. He says the party’s volunteers hit the streets hard and were able to exceed original voter contact goals. “You walk in the precincts that are most heavily populated, and you can do it,” Baer says.

Regardless of how you work the numbers, a heavy GOP presence was reported in the field this weekend. It’s a sure sign state Republicans are making progress in accomplishing their long-held goal of building a true grassroots organization and an indication of how localized this year’s elections could become. Charlie Davis, who was recently hired by the Louisiana Republican Party as director of Victory 2008, the state party’s federal campaign arm, has also launched LaGOP.net this campaign season. It’s a new social networking site for Republican activists to interact and dish on the latest political issues. Members can connect with like-minded GOP enthusiasts by creating their own profile, starting their own blog and commenting on other’s blogs. So far, there are a modest 218 members.

The similarly-named Louisiana Victory, the Democrat’s federal arm in Louisiana, has made more than 532,000 phone calls and personal visits to voters since mid-April. During the week of Sept. 22 alone, the organization made 50,888 phone calls and filled 2,558 shifts. “We have implemented the largest voter contact program in Louisiana history with more than 50 paid staff that has been on the ground since March,” says Bradley Beychok, coordinated campaign director for the Louisiana Democratic Party. “The Republicans might have had a ‘Super Saturday;’ welcome to the game. We have had a super six months and will continue to fight and win.”

The presidential campaign of Sen. Barack Obama also announced last week that it had recruited roughly 12,000 volunteers during the past 19 months. In all, the Louisiana Democratic Party has Obama volunteers in offices and field operations throughout the state, including New Orleans, Baton Rouge, Lafayette, Lake Charles, Shreveport, Monroe, Alexandria, Covington and Slidell. Despite most predictions that McCain will win Louisiana, the numbers are encouraging for supporters. “This unprecedented volunteer turnout shows the incredible enthusiasm in Louisiana for Sen. Obama’s campaign,” says David Huynh, Louisiana director of Obama for America.

As for other forms of voter contact, among the more interesting stories from last week was about the contact that almost didn’t happen. While GOP Treasurer John Kennedy and incumbent Democrat U.S. Sen. Mary Landrieu have already agreed to three public exchanges for the month of October, they had some difficulty agreeing to what is arguably the highest-profile debate of the season: the WWL-TV debate, which is simulcast on other CBS affiliate stations in Louisiana and usually across state lines thanks to WWL 870 AM, its radio partner. (That agreement is still pending.)

Kennedy communications director Leonardo Alcivar blames the Landrieu camp for backing out of a previously agreed-upon air date of Oct. 29, just days before the Nov. 4 election. Scott Schneider, Landrieu’s press secretary, responds that his boss never reneged on a promise because a commitment was never made. Rather, Landrieu asked for alternatives. “The last week of the campaign is always packed with events and it was already booked up,” Schneider says. “If we can get the date changed, she would love to do it.”

The two eventually agreed on Oct. 22 but not before putting the television station through the ringer on what is normally an easy date to set. WWL-TV News Director Chris Slaughter says he was “surprised and saddened” that a public service such as a televised debate had come to blows. “In their minds, there’s some kind of strategy to holding on to the dates they want,” Slaughter says. “No one wants to budge.”

Fortunately, for both campaigns, the behind-the-scenes positioning will not be part of the live debate. Then again, debating probably won’t be part of the debate either; the strict guidelines candidates demand now turn the exchanges into an hour-long rehash of their prime-time commercials. It’s a good thing both frontrunners have thousands of volunteers on standby to deliver their messages to the homes of voters.