LGMC hopes its staunch support of breastfeeding will serve as a model for other companies. 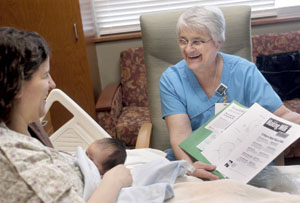 When it comes to practices supportive of breastfeeding, Louisiana ranks at the bottom of the nation. In a study released in Morbidity and Weekly Reports, a publication of the Centers for Disease Control and Prevention, the state was among seven with the lowest percentages — less than 30 percent — of children who were breastfed for six months. In fact, a report card issued by the Pennington Biomedical Research Center in Baton Rouge on Sept. 22 gave Louisiana an overall score of “D” on children’s health, specifically regarding obesity and diabetes.

These statistics are shameful, considering that studies consistently show that both babies and mothers gain many benefits from breastfeeding, including a bonding factor and weight control for both children and breastfeading moms. Compared to formula-fed babies, breastfed babies are less likely to become overweight, and nursing mothers have a better chance of returning to their pre-pregnancy weights.

Research also shows that breast milk offers complete, perfect nutrition, and contains antibodies that protect babies from illnesses, such as respiratory infections. When these breastfed infants become older, they average eight to 10 points higher on IQ testing, and their mothers have lower rates of breast cancer, osteoporosis, and even diabetes.

But Louisiana is not totally in the dark when it comes to breastfeeding. Back in 2001, the state Legislature passed a law prohibiting discriminatory practices against a mother nursing her baby. The legislation states that it is a discriminatory practice to deny a woman the “full and equal enjoyment” of the services provided at a public place on the grounds that she is breastfeeding her baby.

A breastfeeding movement is now gaining momentum locally, thanks to an in-house program at Lafayette General Medical Center. In August the hospital announced a breastfeeding outreach program at a luncheon for expectant and recently-delivering employees. The first component is a hospital employee lactation support program, which offers LGMC’s new moms, as well as spouses of male employees, a meeting with a lactation consultant to explain the breastfeeding process. A bonus is that all nursing moms will receive a double electric breast pump, worth about $200, for free.

Among the first recipients of the free breast pump was LGMC employee Aimee Foret, who just delivered her first baby, Jonah. “There are so many expenses with having a new baby that having a huge gift like that really helps out,” says Foret.

Lafayette General already had initiatives in place to make breastfeeding employees’ transition back to work smoother. The facility offers two private lactation rooms to allow new moms to pump their breasts. For patients, LGMC hosts a delivery prenatal class series that addresses breastfeeding. After birth, the hospital has mother-baby “couplet” care and 24-hour rooming in, permitting unrestricted access for the baby to the mother’s breast. “It allows lots of that skin-to-skin contact, which is so important,” explains registered nurse Evelyn Landry, an international board certified lactation consultant at LGMC. “Our mothers get to nurse immediately after delivery — most of them within that first hour or sooner.”

According to Carrie Templeton, administrator of women’s and children’s services, about 35 women at LGMC go on maternity leave each year. Of those, approximately 55 percent participate in breastfeeding. “Our goal is to increase the breastfeeding percentage,” she says.

“Our hospital has our policies in place, and we are educating all of the staff as to those policies,” Landry says. “And, our hospital was the first one in the Lafayette area to meet all of those criteria.”

The third part of LGMC’s outreach program was the implementation of the Business Case for Breastfeeding, an initiative of the U.S. Department of Health and Human Services. Landry attended training for the program, which assists employers in developing lactation support programs in the workplace. DHHS studies show that supporting breastfeeding employees saves money, because these new moms miss work less often, translating into lower medical health care costs for businesses. The lactation support program consists of four components: allowing nursing mothers privacy to express milk, permitting flexible breaks, providing education on how to continue breastfeeding upon returning to work, and implementing supportive policies and practices that enable women to successfully return to work and breastfeed.

Many employers with 500 or more workers, including CIGNA, Texas Instruments and Home Depot, as well as smaller businesses with one to 99 employees, already have supportive lactation programs in place. LGMC has jumped on the Business Case bandwagon, and hopes to encourage other community employers to join the lactation support movement.

“LGMC hopes to be a resource for some of these employees and employers who want to implement the Business Case for Breastfeeding in their workplace,” Landry says. “Everybody is just kind of waking up to this important thing that we’ve had since the very beginning of the human race — breastfeeding. But in the years between the 40s and the 70s, the rates of breastfeeding went down to the absolute lowest levels ever. And now, internationally, nationally, statewide and locally, everybody is trying to do their part in bringing awareness and support to bring this breastfeeding rate up, because of the amazing health benefits that it gives, both for the mothers and the babies.”