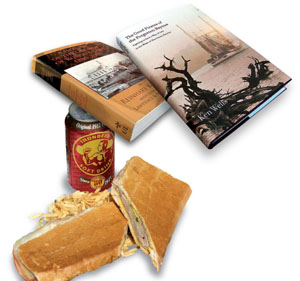 GONE CUBAN
Mercedes Grocery at 3138 Johnston St. has painted a sign on its storefront proclaiming “best Cuban sandwich in town.” This small Latin grocery is chock full of authentic Mexican and Carribean specialties, from chorizo sausage and Hatuey nonalcholic beer to its daily plate lunches and sandwiches. The $7.99 Cuban sandwich doesn’t disappoint and, on a foot-long loaf of pressed french bread, it should at least pass as the biggest Cuban in town. While you’re there, pick up an Ironbeer soft drink, a cream soda with a slight metallic taste which bills itself as “the national beverage” of Cuba. Mercedes Grocery is open seven days a week. Call 988-4747 for more information. — Nathan Stubbs

THE GOOD PIRATES
Since Hurricane Katrina’s destructive winds and flooding three years ago, books about the catastrophe have tended to focus on New Orleans or the government’s failure before, during and after the storm. Until now. Noted journalist and author Ken Wells’ The Good Pirates of the Forgotten Bayous: Fighting to Save a Way of Life in the Wake of Hurricane Katrina is a deeply rooted personal narrative about a family of Louisiana shrimp boat captains and their neighbors in St. Bernard Parish, southeast of New Orleans. Wells, who now lives in Manhattan, grew up in Bayou Black and is senior editor for Conde Nast Portfolio magazine, having served as writer/editor at the Wall Street Journal (where two of his writers won the Pulitzer Prize) for more than two decades. “Ken Wells is first and foremost a great reporter,” says University of Missouri School of Journalism’s Don Ranly. “Nothing escapes him, and yet every detail he includes counts. This book is literary journalism at its best.” Wells will be in Lafayette Wednesday, Oct. 8, for a book signing and reading at Barnes & Noble. The event begins at 6:30 p.m., with the reading at 7 p.m. — Leslie Turk

GERMAN GENEALOGY
Three miles northwest of Rayne, the community of Roberts Cove is anchored by St. Leo’s Catholic Church. Settled in the early 1880s, the community is known for its strong German roots and its annual GermanFest, now in its thirteenth year, held on the first weekend in October. This year’s festivities take place this weekend, Oct. 4-5, and a recent book from UL Lafayette’s Center for Louisiana Studies covering the area’s history since 1880 will be released. A History of The Germans of Roberts Cove, 1880-2007 by Reinhart Kondert will be available at the festival and retails for $30. For more information on the book, visit cls.louisiana.edu, and for more information on GermanFest, visit www.robertscovegermanfest.com — R. Reese Fuller