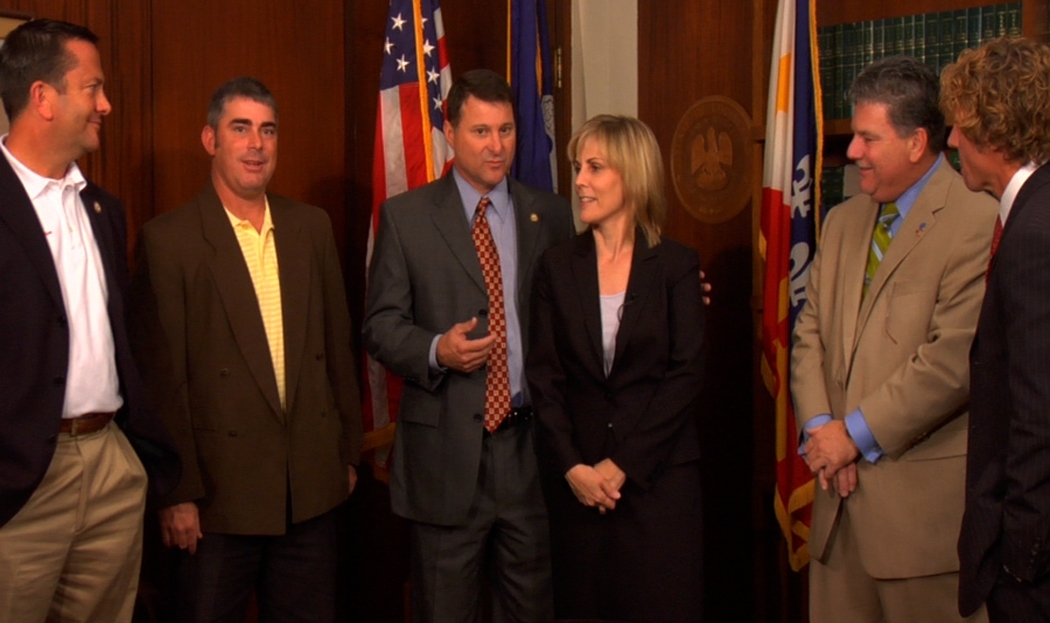 Attorney Nancy Landry switched her party affiliation to Republican yesterday, just two days after state Rep. Don Trahan’s resignation from the legislature opened up a new campaign for his District 31 seat. Landry fell just 33 votes short of defeating Trahan, the Republican incumbent, in last year’s District 31 election. Landry ran that race as a conservative Independent. Several observers deduced Landry would have won had she had an "R" behind her name on the ballot. In that race, balancing her Indpendent party affiliation with her avid support for GOP gubernatorial candidate Bobby Jindal at times proved difficult for Landry; At one Jindal campaign rally in Lafayette, organizers instructed her not to pass out her campaign fliers. Landry is now widely regarded as the frontrunner going into the special election to succeed Trahan, which will be held Nov. 4.

Flanked by a group of high-profile Republican supporters, including state Sen. Mike Michot, state Rep. Page Cortez, and Lafayette City-Parish Councilmen Jared Bellard and Keith Patin, Landry officially signed up as a member of the GOP yesterday at the parish courthouse. She released the following statement:
During the last election, a lot of my friends asked me to become a Republican. I’m pro-business, pro-family, and a strong supporter of Bobby Jindal. I campaigned hard for him. But I was concerned that partisan infighting in the legislature might prevent real progress. I have been very impressed, however, by the work of the Governor and House Speaker Tucker in working across party lines to advance a reform agenda for Louisiana. I look forward to working for Louisiana’s future with the administration, legislative leaders, and our area delegation. I am convinced I can be most effective for the issues I am committed to as a Republican.