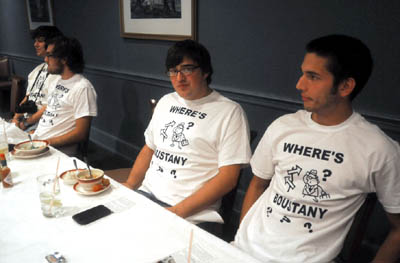 Last night, the local public interest group Concerned Citizens for Good Government hosted a forum for the district’s Congressional candidates. Unfortunately, only two of the candidates - Democrat Don Cravins Jr. and U.S. Constition Party hopeful Peter Vidrine - showed up. The absence of incumbent Congressman Charles Boustany, a Republican, did not come as a surprise - an issue the other candidates freely exploited. Vidrine’s two sons, along with a group of UL student friends, showed up to the event wearing t-shirts with “Where’s Boustany?” printed across the front. Concerned Citizens’ President Carroll Baudoin says he had been trying to schedule the event with Boustany’s office since July, but the Congressman would never committ to a date he could attend. Baudoin’s isn’t the only group finding it hard to schedule Boustany. Last week, KLFY announced that Boustany was opting out of the only planned televised debate for the district's candidates. The station is still hoping to broadcast one of three planned candidate forums. The candidates are scheduled to square off Wednesday night in Lake Charles, Oct. 21 in Opelousas and at an Oct. 22 forum on the campus of UL Lafayette.

Baudoin says he believes Boustany’s decision not to attend last night was a political one. “Generally, incumbent candidates sometimes believe they can only hurt themselves in these public forums,” he says.  “It’s unfortunate. I believe Charles made an error in decision making, I think he needs to be more exposed. Especially at this time. because of this Wall Street debacle, a lot of people are really concerned and the immediate person that we look to is our Congressman."