Elisa Monte Dance translates a Creole tradition from the dance hall to the concert stage. 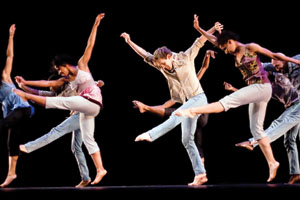 It’s a very touchy subject when an artist from outside attempts to interpret the essence of local culture. Here in this French-speaking corner of the world, we have been ridiculed and maligned by Hollywood to the point where no one wants to open their doors to outsiders. Fortunately, there are true artists deserving of our trust, none more than New York choreographer Elisa Monte and her contemporary dance troupe. This weekend, her homage to the Creole community, Zydeco Zaré, will make its world premier on the stage at the Heymann Center for the Performing Arts. Zydeco Zaré (old French for “dance”) was commissioned by the Performing Arts Society of Acadiana.

Monte and her dancers spent quite a bit of time in Acadiana doing field work for this project. They met musicians and dancers at local dance halls and on trail rides, as well as simply visiting over a cup of coffee. “I came to the conclusion that what zydeco is about is the people,” says Monte. “Lineages, families passing on information from one person to the next. I want to capture the feel of an afternoon, of a moment.” Monte also gathered photographs of old-time musicians playing at house parties and on front porches.

She collaborated with fiddler Jonno Frishberg, formerly of Charivari, who created a compilation of Creole music woven from different generations of artists. The piece contains old jure songs, Beau Jocque’s version of “Johnny Can’t Dance,” and Canary Fontenot’s tune “Bee de la Manche.” Currently guitarist Sam Broussard is overseeing the musical part of the production, which Jeffery Broussard and the Creole Cowboys will be preforming live the night of the premier.

Don’t expect to see an exhibition of zydeco steps. Monte is a renowned choreographer who has worked with cultures world wide, and Zydeco Zaré is her interpretation of what she saw and felt while visiting in Louisiana. “It’s not one dance after another,” she says, “There’s a flow to it, from morning till night, from one moment in history to another moment in history.” Monte’s company will translate zydeco from the dance hall to the concert hall. “We’ll bring it to a different arena. We’ll be able to take this music and culture that’s used to the dance hall and bring it to other places in the world.”

Elisa Monte Dance opens the PASA Series at 7:30 p.m. on Saturday, Oct. 11 with the world premier of Zydeco Zaré. The program also includes Monte’s Pigs and Fishes — commissioned by Alvin Ailey for his legendary troupe — and Run to the Rock, set to Nina Simone’s interpretation of the popular gospel song, “Sinnerman.” Tickets are available through ticketmaster. For more information, contact PASA at 237-2787.