In a short race for the District 31 state House seat, Nancy Landry has a head start. 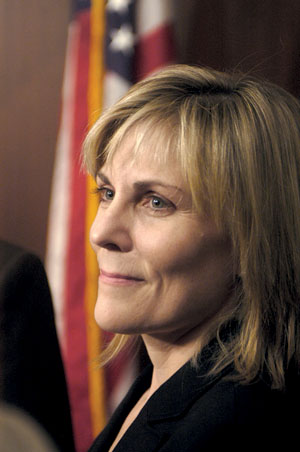 If you went to the polls to vote last Saturday, there was a good chance you saw signs for Nancy Landry. Despite not being on the ballot that day, Landry had more signs out (about 500) than some candidates who were. In fact, Landry, who’s running in the special election to replace District 31 state Rep. Don Trahan, hadn’t even qualified as a candidate yet for her race. Nobody had. Qualifying for District 31 opened on Monday, Oct. 6, running through 5 p.m. Wednesday, Oct. 8.

Following Trahan’s resignation from the state Legislature last week, Speaker of the House Jim Tucker called a special election for District 31 to be held on Nov. 4, coinciding with the presidential election. A runoff, if necessary, will be held Dec. 6. For Landry, who ran against Trahan last year for the District 31 seat, getting signs out was only a matter of pulling them from storage, and the move clearly demonstrated the advantage Landry has going into the short, month-long special election race.

While it is more cost-effective for taxpayers to hold special elections in conjunction with regular elections, and the Nov. 4 ballot should draw a heavy voter turnout, the election poses a significant challenge for any new or relatively unknown candidate. Some have skeptically eyed the short election as a political decision favoring Landry. Louisiana law gives wide discretion to both the speaker of the house and the senate president in calling special elections for state legislative offices.

“The election being called so quickly is really an issue that favors Nancy Landry,” says local attorney Lester Gauthier, who formerly hosted political talk shows on both KPEL radio and Acadiana Open Channel. “Nancy Landry has run already within the last year, and she has already spent the money and has campaign stuff printed.”

As of press time Monday, Landry’s only announced challenger was Maurice businessman Troy Theriot. Originally from Erath, Theriot is not well known in Lafayette Parish, which has 80 percent of District 31’s voters. The district covers south Lafayette, including the Broadmoor and Greenbriar subdivisions, Scott, Milton, and Maurice in northern Vermilion Parish.

Theriot worked on both of Don Trahan’s state representative campaigns and ran his own campaign for state representative of District 47 in 1999. (In 2003, redistricting placed Theriot’s Maurice home in District 31). Theriot garnered 41 percent of the vote in a losing effort against incumbent Mickey Frith. A 38-year-old Republican who operates an oilfield supply boat business, Theriot pitches himself as a hard-working small business owner who wants to get critical coastal erosion and road projects on the fast track. “I’ve been in the oil industry all my life, since I graduated high school,” he says. “I don’t have a [college] degree, just a degree in hard knocks and experience.”

Theriot is backed by his ally, Democratic state Sen. Nick Gautreaux of Abbeville. Theriot faces an uphill struggle against Landry, who fell just 33 votes shy of Trahan in last year’s election. Landry impressed voters by outworking the Republican incumbent Trahan, walking the district touting ethics reform and support for gubernatorial candidate Bobby Jindal. She also outraised Trahan nearly two to one, and spent almost $150,000 on the race, including seven months’ worth of TV spots. Since her run last year, Landry has launched her own public relations and lobbying firm, Pelican Strategies. Among other things, she hosted a fund-raiser that brought in upwards of $100,000 for Lafayette state Sen. Mike Michot and managed the re-election campaign for local Judge Phyllis Keaty, whom she previously worked for as a law clerk. Keaty did not face opposition, but Landry still helped her raise just under $100,000.

A Lafayette native, who spent years in Washington state, Landry is a divorced single mother with two sons — an experience she hasn’t shied away from in her campaign for public office. “It’s made me a stronger person,” she told The Independent Weekly last year. “Everybody’s had their family troubles and personal difficulties. I think what sets people apart is how you handle it and what you do with that experience. Do you help other people with it or do you brush it under the rug?”

Unlike last year, when she ran as an independent, Landry is entering this year’s race as a Republican. She officially changed her party affiliation at the parish courthouse last week, flanked by high-profile Republican supporters including Michot, state Rep. Page Cortez and city-parish councilmen Keith Patin and Jared Bellard.

The party switch wasn’t a surprise. Many political observers deduced Landry would have defeated Trahan last year had she had an “R” behind her name on the ballot. In that race, balancing her independent party affiliation with her avid support for GOP torchbearer Jindal at times proved difficult; at one Jindal campaign rally in Lafayette, organizers instructed Landry not to pass out her campaign fliers.

In her press release announcing the decision, Landry says she could have be a more effective bipartisan legislator as an independent but adds: “I have been very impressed by the work of the Governor and House Speaker Tucker in working across party lines to advance a reform agenda for Louisiana. I look forward to working for Louisiana’s future with the administration, legislative leaders, and our area delegation. I am convinced I can be most effective for the issues I am committed to as a Republican.”

As of press time Monday, at least one other potential candidate was strongly considering the District 31 race. Charlie Buckels, vice chairman of the state Republican Party, has longed for another shot at the seat since losing by 13 votes in 2003 to Trahan. Buckels’ position with the state party kept him from challenging Trahan, an incumbent Republican, again last year. “There’s a lot of a considerations,” Buckels said on Monday. “If I do something like this, I will not do it half-heartedly; it’ll be diving in with everything I have.” Some obvious considerations for Buckels will be a conflict of interest that could arise from his current job as a regional salesman and state lobbyist for Redflex Inc., the company that operates automated traffic camera programs in Lafayette and Mandeville. Buckels also may have to step down from his elected post with the state Republican Party.

Two other potential candidates eyeing the race, former city-parish councilmen Lenwood Broussard and Rob Stevenson, told The Independent they would not be running. Former Councilman Randy Menard is leaning against a run but says he will make a final decision after he sees who else has qualified.