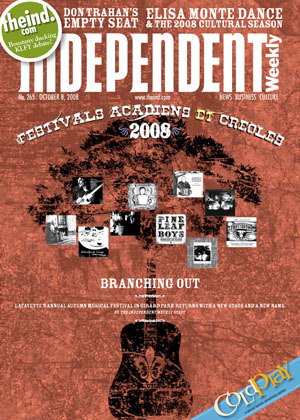 Since 1974, Festivals Acadiens has given the local Cajun and Creole culture an entire weekend to check in with itself, take its blood pressure, and monitor its own heart. This year’s festival provides the same opportunity, with 48 performances and a few tweaks to the 34-year-old tradition.

Last year’s event was a solo debut of sorts, the first time in 28 years Festivals Acadiens was produced without the support of the Lafayette Jaycees. Instead, says Barry Ancelet, the festival’s founder and current organizer, he and Chef Pat Mould set up a community board and incorporated the festival as its own 501c3 nonprofit organization.

The festival’s name has also officially changed to include the word Creole. “We had this opportunity to make a name change that would reflect better what this festival has always done, which is to celebrate both Cajun and Creole culture,” Ancelet says, acknowledging a misconception throughout the years that Creole artists have been minimized, and even excluded, from the past celebrations. To dispel the myth, he points to the first tribute staged in Blackham Coliseum that featured Clifton Chenier, Alphonse “Bois Sec” Ardoin and Canray Fontenot, as well as the Balfa Brothers, Dennis McGee and Nathan Abshire. “It’s been a real part of our focus all these years, and it just occurred to us that it might be better if our name reflected what we were actually doing.” For the first time this year the festival is being referred to as Festivals Acadiens et Créoles.

And another big step has been made for two-steppin’. “There are avid dancers,” Ancelet says, “who for years have been begging us to put a floor out there, and I’ve resisted it because I don’t know that a floor is a great idea in front of a festival stage. But this area will be designed around the floor.” The Salle de Danse will feature a large wooden dance floor and a third large stage for festival performances.

Each year, the festival has been dedicated to individuals in the world of Cajun and Creole music, who, as Ancelet says, “have contributed more than just music. They’ve affected a change or they’ve influenced a generation.” Past honorees include Adam Hebert, Walter Mouton, Shirley Bergeron, Dewey Balfa, Nathan Abshire, Belton Richard, Aldus Roger and Lawrence Walker.

This year’s festival will be dedicated to Zachary Richard, for not only his music but also for his decades-long role as a musical ambassador. “He was the one who first discovered the potential interest from Quebec and later New Brunswick and France and opened the Francophone world to our culture,” says Ancelet. “He’s influenced a whole younger generation of Cajun musicians, getting them to realize Cajun music could be both traditional and modern at the same time, that it could respect the past and rock out.”

For a taste of how Richard has managed to rock the festival, check out the new Festivals Acadiens Live 1981, which features him with Sonny Landreth. The release is the first in a series of forthcoming titles to be released by the festival and Louisiana Crossroads Records.

Other notable CDs have been released by local musicians within the last few months. Most of the artists we’ve highlighted below will be playing at Girard Park this weekend, and some you can only hear by leaving the festival grounds. But here’s just a taste of the music that continues to bubble up from the local soil. — R. Reese Fuller 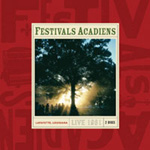 At first glance, this title simply looks like a reissue of the Festival de Musique Acadienne ’81 Live album released on Swallow Records. The first disc of this two-CD set is just that, but the second disc contains nearly twice as many tracks of previously unreleased material from the same artists featured on the original landmark vinyl record. There’s Cajun and Creole music’s statesmen like Alphonse “Bois Sec” Ardoin, Freeman Fontenot, Dennis McGee, Sady Courville, Canray Fontenot, Preston Manuel, John Delafose, D.L. Menard, the Balfa Brothers, the Ardoin Brothers, Zachary Richard, Michael Doucet and BeauSoleil. These original recordings from UL Lafayette’s Archives of Cajun and Creole Folklore, while not always up to today’s digital standards, still offer priceless portraits of Cajun and Creole music in its full-blown Renaissance regalia. Festivals Acadiens Live 1981 is a must-have staple for every music library. The double-disc CD retails for $20 and will be available at the festival as well as www.LouisianaCrossroads.org. — R. Reese Fuller 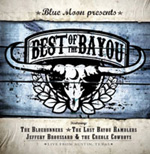 Blue Moon Presents “Best of the Bayou” (The Bluerunners, Jeffery Broussard & The Creole Cowboys, and the Lost Bayou Ramblers)

There’s no live music like Cajun and zydeco, especially at a venue like the Blue Moon Saloon. This year, owner Mark Falgout threw a party and brought 300 pounds of boiled crawfish to Austin’s SXSW. Along with two solo sets, Falgout booked the Lost Bayou Ramblers, the Bluerunners and the Creole Cowboys to re-create the Blue Moon in Austin. With the release of Best of The Bayou, Falgout brings the night back home. Though it packs the energy of these three tear-it-up bands, the record is incredibly well-recorded, mastered and polished and lives up to its name with these top choice Louisiana roots musicians. For more info, visit www.BlueMoonPresents.com. — Nick Pittman

It’s clear that the Lost Bayou Ramblers’ latest disc Vermilionaire is tailored and trimmed with extras to make the Grammy-nominated band a Grammy-winning band. Put it in the right stereo, and the song titles scroll across the display. On the gatefold jacket, there’s a summation of what it means to live in Louisiana’s un-comfort zone between cultural and scenic beauty and the ever rising Gulf. It’s tremendous traditional Cajun music with string-era touches and mind-blowing energy, both incredibly old school and progressive as well. The Michot brothers’ accordion and fiddle come together so tightly that the two can’t be cut apart with a scalpel. LBR may have taken extra steps to get the disc into a Grammy runoff, but it’s not a record that begs to be heard. It’s a record that needs to be heard. For more information, visit www.LostBayouRamblers.com. — Nick Pittman

This is a compilation of rare French a capella ballads sung by Cajun and Creole women and recorded by folklorists like Harry Oster, Ralph Rinzler and Barry Ancelet over a 30-year period. These 34 tracks include songs sung by Alma Barthelemy, Lula Landry and Inez Catalon — as well as 11 other south Louisiana women. Look for La Musique de la Maison on sale at the festival as well as at www.originjazz.com. — R. Reese Fuller

David Fricke of Rolling Stone writes that the Pine Leaf Boys’ second album on Arhoolie Records, Blues de Musicien, was “the next best thing to a Saturday night dance in Lafayette.” The Boys’ latest and third record Homage au Passé is their first under a new record deal with Lionsgate Music. Catch the boys on the Heritage Stage Sunday at 3:45 p.m., as well as a Sunday evening show at the Blue Moon Saloon, along with Horace Trahan & the Huval-Doucet Band. For more information, visit www.PineLeafBoys.com. — R. Reese Fuller

Sonny Landreth: From the Reach

From the ghost notes of the opening track of “Blue Tarp Blues,” to the arching melodic slide-line that reaches to the starry night’s roof on the closer, “Universe,” it’s an extraordinary journey that only a master like Sonny Landreth can deliver. At the top of his game and still pushing, Sonny’s reach goes to some interesting places like the near shred-like slide propulsion of “Überesso” which could serve as a “Wipeout” for the space age if anyone else but him could play it. Landreth’s vocals are in fine form as well and almost as instantly recognizable as his monstrously inventive slide playing. For more information, visit www.SonnyLandreth.com. — Dege Legg 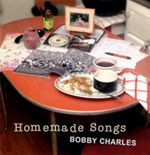 South Louisiana’s legendary Bobby Charles made the rounds in the 1960s, hung with Dylan & The Band, wrote “Walking To New Orleans” for Fats Domino and helped pioneer swamp pop into mass consciousness. In Homemade Songs, Charles further makes the case for his legend with a collection of timeless songs that crawl from some Southern hemisphere of the collective unconscious where great songs are born fully formed and ring truer with each listening. Backed by a band composed with the likes of Sonny Landreth, Dr. John, and Sam Broussard, you can’t go wrong with Homemade Songs.
— Dege Legg

Santeria: Year of the Knife

Classic Rock magazine recently tagged Santeria as part of “The New Breed of Southern Rock” and wrote that “Come On Baby” is “a splendid bit of back-street boogie and thumping cowbell,” calling it “prime Santeria.” The track opens the band’s latest album Year of the Knife — the third in its 14-year history — produced with Grammy Award-winning engineer Tony Daigle and featuring local musicians like Steve Riley, Roddie Romero, Dickie Landry, Dave Ranson and Richard Comeaux. Santeria takes the stage for a CD release party on Friday, Oct. 10, at Nitetown in downtown Lafayette. Ten bucks gets you through the door and a copy of the new CD. (And yes, Santeria’s frontman Dege Legg does work at The Independent, but we would be plugging this even if he didn’t.) For more info, visit www.myspace.com/santeria777. — R. Reese Fuller

After getting shuffled through a game of musical chairs with record labels, Marc Broussard keeps it coming. One thing is sure: first and foremost, Broussard’s got a set of soul-infused power pipes that will carry him through a lengthy career, and he keeps the good vibes flowing. Keep Coming Back is equal parts ’60s R&B, power soul balladry, funkhouse escapades, and even rock-tinged soul/pop workouts. All the same influences are there on songs like “Power’s in the People” and “Hard Knocks”— Gaye, Mayfield and Redding — just in tighter focus. Add a little Dobro, horns, bouncing bass lines, and you’ve got another great record from an unmistakably talented hometown dude. For more information, visit www.MarcBroussard.com. — Dege Legg

Downtown Alive!
5:30 p.m. until: Roddie Romero and the Hub City
All Stars and Zachary Richard