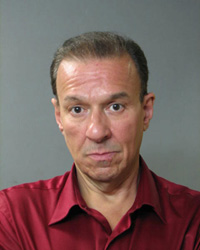 Former State Farm agent and antiques dealer Wally Romero was arrested yesterday by the Lafayette Parish Sheriff's Office on a warrant for felony theft. Romero, 51, posted a $50,000 bond and was released. The arrest stemmed from an investigation by the Lafayette Police Department, which has turned the case over to District Attorney Mike Harson's office.

According to the initial arrest report, local police were dispatched to the 1300 block of Verot School Road in July after receiving a complaint of an alleged theft of property valued at $25,000. "Victim reported the suspect sold the listed item and has not provided the proceeds to her," the report states. It does not specify what type of property, listing only "miscellaneous."

On Aug. 26, Romero filed Chapter 13 bankruptcy protection, according to U.S. Bankruptcy Court records. Often called a "mini Chapter 11," Chapter 13 is for individuals or small proprietary business owners who want to repay their creditors but are having financial problems. Romero will be able to retain his property if he repays all or a portion of his debts to creditors under a plan approved by the court.