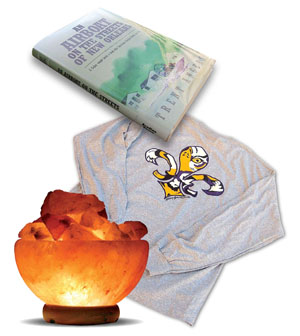 FIND YOUR BLISS
Negative ions are emitted by waterfalls, thunderstorms and the oceans. Once they reach our bloodstream, negative ions are believed to produce biochemical reactions that increase levels of the mood chemical serotonin, helping to alleviate depression, relieve stress, and boost our daytime energy. If you can’t get out of the office this afternoon for some dopamine bliss, the next best thing is a Himalayan Salt Crystal lamp. Carved from chunks of pure salt, mined from the foothills of the Himalayas, the release of negative ions is also touted to help relieve breathing ailments and skin conditions. Even if you already walk around in an alpha state, the warm orange light emits a relaxing glow, helping you stay in the moment, even if that moment is chained to a computer terminal. Salt crystal lamps can be found at Tranquil Spaces on Bertrand, across from Legends. They range from $40-$75, and some come with an oil diffuser for scenting the air with essential fragrances like sandlewood, or blends with names like Love and Meditation. Call 456-3396 for more info. — Mary Tutwiler

TREADING WATER
After Hurricane Katrina sent flood waters into the streets of New Orleans, another flood — of books documenting the tragedy — soon followed. A new book by Trent Angers tells one of those countless stories, seldom retold in print though, of the heroic rescue efforts of an Acadiana couple. In An Airboat on the Streets of New Orleans, Angers tells the tale of Douglas Bienvenu and Drue LeBlanc, a Breaux Bridge couple, who pulled more than 500 people from the floodwaters. The book retails for $16.95 and can be found at local bookstores and ordered online at www.acadianhouse.com.
— R. Reese Fuller
**
FLOWER POWER**
The fleur de lis has long been recognized as the official logo of the New Orleans Saints, but lately, it’s not just Saints fans sporting the flower symbol. UL Lafayette recently adopted the fleur de lis as its logo, and now LSU fans have their own version of the iconic symbol, thanks to artist Stacey Uffman Blanchard of the Baton Rouge Lagniappe Frame Shop and Gallery. Merging a purple and gold tiger with the fleur de lis, Blanchard came up with the Fleur de Tigre, which has quickly become a popular print for T-shirts, car decals, key chains and other assorted Tiger fan paraphernalia. Locally, you can find Fleur de Tigre car decals at Louisiana Hot Stuff, 4409 Ambassador Caffery Pkwy., and a variety of Fleur de Tigre shirts and other items at The Great Escape Water Massage near the food court in the Mall of Acadiana. Decals are $8.50, short-sleeve shirts sell for $24.95, and the long-sleeve is $29.95. Starting next month, look for the Fleur de Tigre necktie. — Nathan Stubbs